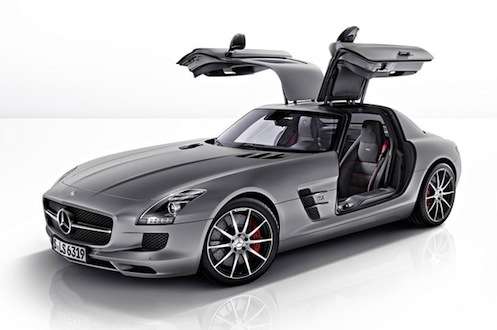 Mercedes-Benz announces an all-new 2013 SLS AMG GT with performance enhancements made to the AMG supercar.
Advertisement

Mercedes-Benz has released information on its new 2013 SLS AMG GT super sports car that boasts performance enhancements that will match the new “GT” added to its name. The new supercar that is available as a coupe or convertible bodystyles is more powerful and gets upgraded transmission and suspension worthy of the GT title.

And after one look at the technical specifications, we can see that Mercedes has definitely improved the performance in the new supercar. Under the hood, the new GT uses the same 6.3-liter performance V-8 from the current SLS, but the GT has an additional 20 horsepower available to tap into. Peak horsepower is now 583 from the previous 563 with torque remaining at 479 lb. ft. The added horsepower gives the SLS AMG GT a 0-60 time of 3.6 seconds instead of 3.7. Mercedes was able to achive the additional horsepower through an increase in compression and internal dethrottling measures.

The 6.3-liter V-8 is mated to a seven-speed AMG SPEEDSHIFT dual-clutch transmission located on the rear axle that has been recalibrated for more direct shifts when in "M" manual mode. Engineers were able to develop a new gear change logic and optimized transmission control, to shorten the shift time required during shifts. The additional horsepower, alloy paddle shifters and transmission changes should give the SLS AMG GT some fast track times.

The 2013 SLS AMG GT suspension was not left untouched and also gets some performance improvements. The GT gets a new AMG Adaptive Performance Suspension setup. While utilizing the same twin aluminum wishbones all around, the new suspension features stiffer and more aggressive spring/damper tuning for a more aggressive driving.

The suspension features two settings, “Sport” and “Sport plus” which is the most hardcore setting for use on the track. The press release says the new SLS AMG GT will be able to deliver faster lap times on the race track than with the regular SLS AMG. All of this is achieved through a button on the AMG DRIVE UNIT that automatically reduces body roll.

The SLS AMG GT interior gets a new Designo style package. This optional extra comes in three different color combinations in both single and two-tone finishes. The GT features leather surfaces on the sport seats with contrast stitching and a diamond quilt pattern on the seats and doors. A Bang & Olufsen BeoSound surround sound system is standard.

To set apart the 2013 SLS AMG GT on the outside, the super car gets darkened lights, and red-painted brake calipers showing through the 10-spoke 20-inch wheels. A glossy black finish is used on elements such as the side mirror housing and fender strakes, and a “GT” badge on the rear decklid.

Tesla Giga Berlin's New Hurdle: It's Not Only the Gov't, but Now Tesla Itself
Teslas Are Sold Out Until 2023, But The Timing May Reverse
END_OF_DOCUMENT_TOKEN_TO_BE_REPLACED