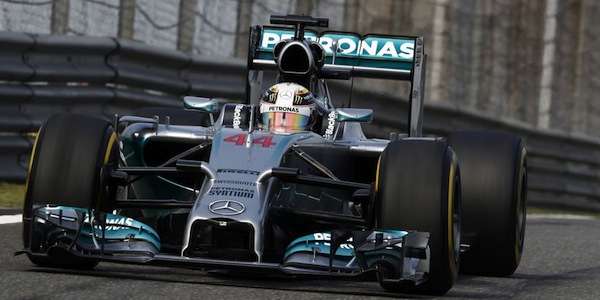 Mercedes AMG Petronas is on a roll and the team achieves another one-two finish at the Chinese Grand Prix this past weekend. The team of Lewis Hamilton and Nico Rosberg took its third consecutive one-two finish and fourth consecutive win at the 2014 UBS Chinese Grand Prix this past weekend. Lewis Hamilton took his third victory of the season, with Nico Rosberg finishing in second position.

Mercedes AMG Petronas is the team to beat in Formula 1. And they showed why at the 2014 UBS Chinese Grand Prix. Lewis Hamilton drove a “lights-to-flag” victory to claim his 4th win for the Mercedes AMG Petronas team and the 17th for the Silver Arrows in Formula One. This was a milestone achievement for Lewis as he achieved 25 career wins, equalling Niki Lauda and Jim Clark, and putting him 8th on the all-time list.

Lewis used a “two-stop strategy” during the Chinese Grand Prix, stopping on laps 17 and 38, running option/prime/prime during the weekend. Nico drove a composed race, but experienced problems after a complete failure of the team’s telemetry system. It left Nico’s engineers without data throughout the race, so there was no communication from the car to the pits. But the issues didn’t deter him from finishing in second position behind his teammate. He also ran two stops, pitting on laps 13 and 37, also running option/prime/prime.

After the race, Lewis Hamilton praised his team that helped bring a victory, Lewis said, “The team has done an amazing job and all the hard work both here and at the factory is really paying off at the moment. This car is just unbelievable; in the final laps, I was pushing a little bit more to keep up the tyre temperatures and it just felt great to drive. I’m so, so happy today. We had to make a lot of changes after P2 in terms of the set-up of the car but after it rained on Saturday, we didn’t know exactly how it would go today.”

Lewis went on to say he couldn’t have done it alone and it was a team win. “There was a lot of hard work done, sitting down with the engineers so that we didn't guess anything and just made the right steps in anticipation for today. I really want to give a big shout-out to the team in Brackley and Brixworth for embracing me last year, for building this amazing car and engine and for continuously pushing forward with so much positive energy in 2014. We are definitely on a roll right now; I’m working hard, the team is working hard and we just want to improve even further when we get back to Europe.”

Nico experienced problems throughout the race, but it didn’t stop him. Nico said after the race, “That was not a perfect weekend for me. Too many things went wrong, beginning with a technical problem and a less than perfect job from me in qualifying. Today I didn’t have any telemetry, so there was no communication from the car to the pits. My engineers couldn’t see what was going on in my car and therefore they couldn’t set up my clutch for the start. The clutch was completely on the wrong place, which is why I had a really bad start."

Now Mercedes AMG Petronas, Lewis Hamilton and Nico Rosberg will leave China and go back to Europe with the lead in the Formula 1 Championship. Next up is Barcelona where the aim will be to have another strong weekend and be back in first place. It was an amazing team result and the whole team can be very proud. Congratulations to Lewis and Nico for a fantastic one-two finish.