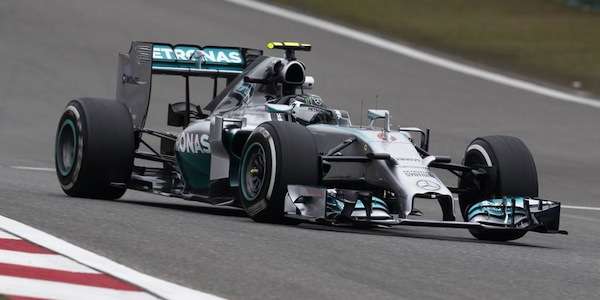 Practice for the 2014 Chinese Grand Prix took place today at a cool Shanghai International Circuit. The Mercedes AMG Petronas team has just completed their first practice and results were mixed. The Mercedes AMG Petronas team will be running new power units at the 2014 Chinese Grand Prix after completing their first cycle during the opening three race weekends.

During the practice sessions, Lewis experienced a mechanical problem with the rear suspension in the first practice that limited his running. He ended the day at the top of the time sheets, posting a time of 1:38.315 on his first flying lap on the soft tires in the second session.

Nico finished in P2 during the first session and P3 in the second session, just short of the times posted by Fernando Alonso in P1 and P2 respectively. Mercedes AMG Petronas reports both drivers will run with new Power Units this weekend after completing their first cycle during the opening three race weekends.

Nico Rosberg is trying to adapt to the new engine set up. After the first practice session he said, “It’s a unique weekend here in China; normally we struggle with rear tire wear but here it seems to be the front tires that I struggle with. You have so many long corners; you are just waiting and waiting and waiting to finish the corners. There is a lot of energy spent adapting to this situation. There is a need to be creative and look at the set-up, because graining can be very bad. We are still looking good performance wise, in terms of one-lap pace and on the long runs. But other teams were watching us and pushing a lot as we saw with Fernando today. I guess that my main rival for a win will again be my teammate, so I’m looking forward to the next in-house battle.”

Nico and Lewis Hamilton both struggled with the balance of the cars and it put them behind in the practice sessions. The Chinese circuit seems to be particularly hard on tires, as it has been every year, so the team will need to be prepared for that. Hamilton lost some of the morning and afternoon sessions with a rear suspension problem, which put him behind in the practice sessions. The team diagnosed the problem and had to remove the gearbox.

The team was able to get back out on the circuit, but both drivers are finding it tricky to get a good balance around this track, which means there are challenges ahead. The Mercedes AMG Petronas will have some more work to do overnight in order to improve further. Stay tuned to Torque News for the latest Mercedes AMG Petronas F1 2014 Chinese Grand Prix news.