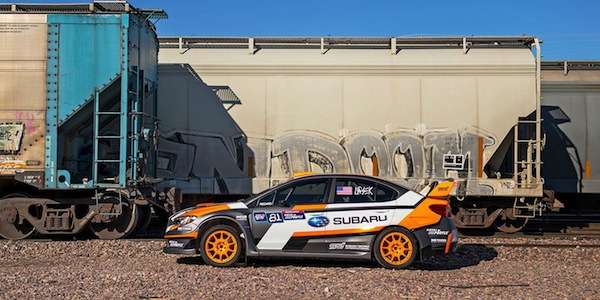 Meet the fastest Subaru WRX STI on the planet: 0-60 in 2 seconds

Subaru’s 2015 WRX STI Global Rallycross car will launch from 0-60 in a lightning quick 2 seconds. What part is STI playing in the new cars development?
Advertisement

Because Subaru Tecnica International (STI) has “stepped up” their technical support of SRT USA, the new 2015 Subaru WRX STI dubbed the VT15x is capable of 0-60 in just two seconds. That’s lightning quick and will help Bucky Lasek and Sverre Isachsen launch their new 2015 STI Global Rallycross car off the line quicker than ever at the 12 GRC race events in 2015.

STI, the performance division for Subaru, has stepped up their technical support of rallycross development with Vermont SportsCar who builds the cars for SRT USA. STI is currently involved with motorsports in Japan with the Subaru BRZ GT300 in the SUPER GT series and they also run the 2015 Subaru WRX STI at the Nurburgring 24-hr race. Now they are bringing their technical knowledge to Subaru’s U.S. GRC race program.

With the new 2015 WRX STI GRC car being unveiled at the New York International Auto Show this week, SRT USA is hoping STI’s involvement will make a big difference in their third season of Global Rallycross. “STI is increasing their support of our U.S. based efforts in rallycross. Their expertise and development resources will take our program to an even more competitive level,” stated Rob Weir, Subaru Motorsports Marketing Manager.

SRT USA revealed the new car in Bucky Lasek’s new livery at NYIAS and the new STI GRC is powered by a 2.0-liter Subaru Boxer engine producing 580 horsepower, it’s coupled to a 6-speed SADEV sequential gearbox and power is sent to all four wheels through Subaru’s all-wheel drive system. Other features include a rallycross-spec widebody, and METHOD Race Wheels. STI likely had a lot to do with the new 2015 WRX STI’s engine and chassis development that enables the 2015 STI to launch from 0-60 in just 2 seconds.

STI is also expanding presence in the U.S. in their STI-brand aftermarket parts as well as introduction of complete STI-tuned cars like the BRZ tS and Forester tS Japan models that haven’t been offered in the U.S. before now. The first area performance fans will see STI’s stepped up presence is with the new 2015 Subaru WRX STI GRC car when it takes to the track in May.

Lasek and Isachsen should be ready to challenge Joni Wiman, Ken Block, Scott Speed and Nelson Piquet JR who are currently the top drivers competing for the title this season. Subaru Motorsports Manager Rob Weir said SRT USA will not be satisfied with just getting to the podium in 2015. Weir commented, “Confidence is high within the Subaru camp that we have a winning package of driver talent driving faster cars for this season. Our goal in 2014 was getting to the front row of every final and being on the podium. This year, our only goal is winning.” Stay tuned as the 0-60 in 2 second 2015 Subaru WRX STI GRC race car makes its debut at Red Bull Rallycross May 31 in Ft. Lauderdale, FL.

Tesla Contemplates A New Strategy for China Retail even As Sales Boom
Jay Leno on Elon Musk & EVs: “I Think He Should Get ... Credit"
END_OF_DOCUMENT_TOKEN_TO_BE_REPLACED