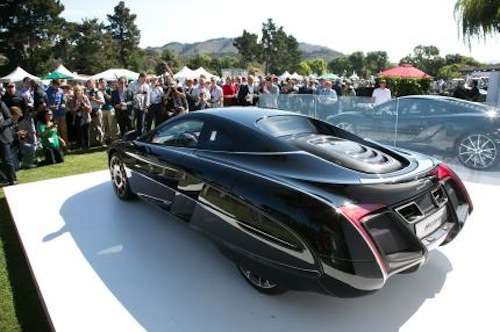 The McLaren MSO presented a very special one-off supercar at Pebble Beach called the McLaren X-1 that was created for an anonymous buyer.
Advertisement

McLaren Special Operations (MSO) created a very special one-off supercar called the McLaren X-1 and was presented during an exclusive event at Pebble Beach over the weekend. The MSO is a division of the British automotive automaker that is responsible for the delivery of bespoke projects. The special McLaren X-1 project was based on the company’s carbon MonoCell and was created for an anonymous buyer.

The anonymous car enthusiast ordered the car and work began over three years ago. The unnamed buyer already owned a McLaren F1, and a Mercedes-Benz SLR McLaren. Now the McLaren client wanted a machine “that had all the capability of the 12C but wrapped in a unique body that reflected his needs and personality.” He met with Paul MacKenzie and design chief Frank Stephenson in a three hour meeting and they began to explore what the buyer wanted.

Inspiration for the McLaren X-1 is taken from many sources

The design team gathered hundreds of images from the world of automotive, architecture, fashion and even the movie industry. They took their inspiration from cars like the 1961 Facel Vega, a 1953 Chrysler D’Elegance Ghia, a 1959 Buick Electra, a 1939 Mercedes-Benz 540K and a 1971 Citroën SM.

From the world of architecture, images of the Guggenheim museums in New York and Bilbao were used. They even obtained inspiration from a Jaeger LeCoultre art deco clock, an Airstream trailer, a Thomas Mann Montblanc pen, a grand piano and an eggplant. The styling and design took 18 months for the buyer to finally sign off on. He wanted something that decades from now, it will be hard to pinpoint when the supercar was created.

No expense was spared in the build process

McLaren MSO used the most advanced materials and the car took two and a half years to build. The team began the process even before the styling was signed off. The car is not just a concept car that will get pushed on and off the tarmac, but is a road-legal car capable of traveling at supercar speeds. The McLaren X-1 underwent approximately 625 miles of testing at the Idiada circuit in Spain with McLaren’s chief test driver Chris Goodwin before being completely rebuilt to concours standard.

McLaren says all the body panels are made of carbon fiber and the brightwork is machined from solid aluminum and then a nickel finish is applied. One of the most unusual styling features are the enclosed rear wheels, “an upshot of the owner’s desire to have a car reflecting timeless elegance.” The wheels are accessed by carbon panels using, as Stephenson says, “some of the most gorgeous hinges you’ve ever seen.”

Inside, the one-off supercar features Nappa leather on the seats, door and roof trim, and switchgear with machined nickel-coated, aluminum bezels. The carbon interior trim has a titanium weave, to give a magical 3D-like effect. The McLaren X-1 is powered by the same the major mechanical components as the 12C, including the twin-turbo 625 horsepower engine, with plenty of acceleration and a top speed to excite the new owner.

McLaren says that after the one-off supercar makes its debut at Pebble Beach, the X-1 will return to MSO headquarters in Woking and be carefully checked over before the new owner puts it in his private collection. McLaren didn’t reveal what the anonymous owner paid to have the McLaren X-1 built.