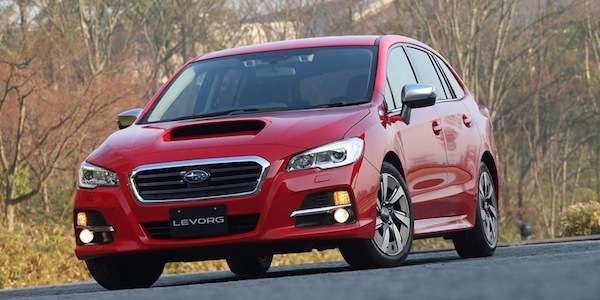 The all-new 2015 Subaru LEVORG is about to launch in Japan and Europe. It could be a preview of the new-generation Subaru WRX STI hatch.
Advertisement

Subaru has just announced the launch of the new 2015 LEVORG 2.0-GT-S Sports Tourer that will be released on June 20, 2014. The new sports wagon is a real looker and could give us a good glimpse of what the new-generation Subaru WRX STI 5-door hatchback variant will look like when the Japanese automaker frees up enough assembly space to produce it.

With the launch of the new 2015 WRX, 2015 WRX STI, 2015 Legacy sedan, 2015 Outback wagon and the 2015 LEVORG, Subaru has been busy trying to find enough enough assembly space to produce all these new and new-generation offerings. It’s no wonder they didn’t bring out a new 2015 WRX and WRX STI in the 5-door hatch body style this year.

But the new 2015 LEVORG 2.0-GT-S is a good example of what the new-gen STI hatchback will look like. It doesn’t take much imagination to see what a new WRX/STI would look like in a hatch body style. The Subaru engineers and design team have done a good job with the sporty new sports tourer and its a sharp looking new model.

Unfortunately, the U.S. market won’t be getting this new wagon as it will only be sold in Japan, European and possibly Australian markets. The new LEVORG becomes available for orders in Japan this month, with production starting in May. There has been strong interest for the LEVORG down under and Subaru is now considering the Australian market also.

The biggest issue for Subaru is production capacity. Production volume needs to ramp up in Subaru’s Japan factory and also in Indiana where the U.S. plant is being expanded to also produce the Impreza line. And with Subaru axing the Tribeca, it gives Subaru an opportunity to ramp up production of their other models.

The new sports tourer is practical and sporty. LEVORG is based on the front half of the latest Impreza platform and combines sleek styling with all-wheel drive and two efficient yet powerful new direct-injection turbocharged engines. It will be offered in Japan with both 1.6- and 2.0-liter direct-injection turbocharged four-cylinder boxer engines, delivering a respective 125kW/250Nm and a WRX-beating 221kW/400Nm.

Both engines come mated to Subaru's Lineartronic SI-Drive CVT transmissions, with the 1.6-liter getting a two-mode version of the transmission and the 2.0-liter featuring a Sport version with selectable eight-speed shift mode.

The new 2015 Subaru LEVORG Sports Tourer will be in Japan showrooms June 20, 2014. The all-new-generation Subaru WRX and WRX STI 5-door hatchback are one step closer to reality. It’s not hard to imagine the new STI hatch by looking at the new 2.0-GT-S Sports Tourer.