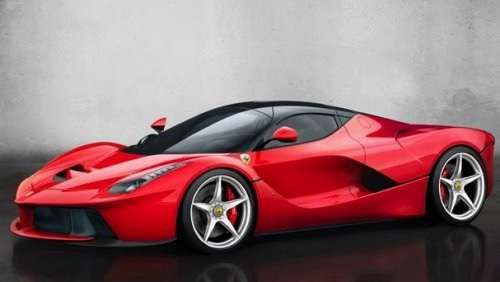 LaFerrari is the undisputed star at the Geneva Motor Show

As the 83rd International Geneva Motor Show draws to a close, the new Ferrari LaFerrari is the undisputed star and still the biggest draw of the show.
Advertisement

The new Ferrari LaFerrari is one of the most anticipated cars to ever be unveiled in Geneva, and the automotive world couldn’t wait to get a glimpse of the new supercar from Maranello. Today is the last day of the 2013 Geneva Motor Show and the LaFerrari is still drawing the biggest crowds at the show. On the first weekend that was open to the public, the new LaFerrari was the undisputed star as numerous performance car enthusiasts came to the Ferrari stand to see the first hybrid from the Prancing Horse.

And the new hybrid supercar is still drawing huge crowds of curious spectators as the show in Switzerland closes in on the last day. The LaFerrari’s success with the public continues as fans lined up to see the new supercar with 963 horsepower from close up. The styling is as much a draw as the technological advancements of the new Italian sports car. Ferrari says the LaFerrari’s styling is the starting point for the new Ferrari generation of the next ten years. And by the reaction from the spectators, it looks like Ferrari has hit a home run.

The first for Ferrari

The hybrid technology is a first for Ferrari. The 963 combined horsepower hybrid drivetrain features 800 horsepower from the V12 gasoline engine and 163 from the electric motor. We could be seeing the future of performance vehicles as more automakers seek to boost performance and at the same time meet new fuel mileage and emission requirements.

Ferrari has been able to produce the 963 bhp for the first hybrid in the history of the Prancing Horse with fantastic performance: The LaFerrari will sprint from 0 to 100 km/h in less than 3 seconds and from 0 to 200 km/h in less than 7. Compared to the Enzo the "LaFerrari" consumes less while the Co2 emission has been lowered by 50%. We will see more high-performance suprcars with this technology in the future.

It looks like the LaFerrari is not only a hit with spectators at the show but it’s already a hit with buyers too. Only 499 examples will be built and more than twice the number of requests has already been received by the Italian automaker. During the presentation of the LaFerrari, Chairman Luca di Montezemolo talked about why the new LaFerrari is already so popular with supercar buyers.

He said, “It is the highest expression of excellence of our company: technological innovation, performance, futuristic style, driving pleasure. It is an extraordinary car, destined to our collectors. A car with technical solutions, which in the future will be integrated in our range and which are the benchmark for the entire sector.”

Ferrari relies on their racing heritage

Ferrari used the knowledge and experience they gained from racing to design and build the new sports car. Montezemolo went on to say, "LaFerrari" represents the best planning and building capacities in our Company, including those acquired in Formula One, knowledge, unique in the world.”

As the 83rd Geneva Auto Show closes, the fans will leave the building, but the new Ferrari LaFerrari will continue to get the attention of media and enthusiasts around the globe. Just Google the name of the new 12-cylinder and it comes up with over 11 million search results. Ferrari has the attention of millions of fans around the world.