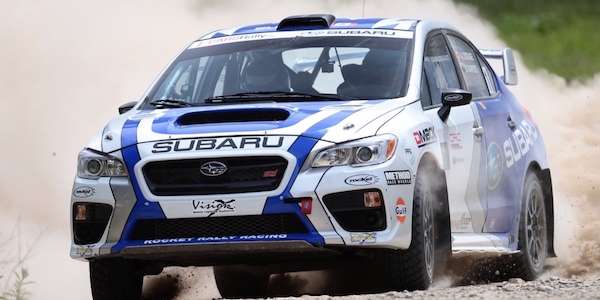 The 2016 Subaru WRX STI makes more global news. There was more to it than just another victory in the CRC.
Advertisement

The 2016 Subaru WRX STI has been making headlines all over the globe. First it was the WRX STI winning its class in the Nurburgring 24-hour race in Germany. Next came the 2016 WRX STI shattering the Isle of Man TT Course record. Now The new STI is making news in Canada. What did the performance sedan accomplish in British Columbia? Sometimes getting a win is sweeter than it looks.

Subaru Rally Team Canada won this past weekend at the Rocky Mountain Rally. The 2016 Subaru WRX STI rally car is leading in the Canadian Rally Championship standings and maintained first-place manufacturer status for Subaru. Subaru dominated the event with seven vehicles finishing in the top ten.

Subaru Rally Team Canada driver Antoine L'Estage and co-driver Darren Garrod piloted the WRX STI to victory. They battled completion from their rivals from Europe, Volkswagen and MINI. The Mitsubishi EVO was also a top competitor. The closest battle was with the 2013 MINI JCW driven by Joel Levac and Stephanie Lewis who came in second. It was Subaru who came out on top again. A Subaru Impreza WRX STI driven by Brandon Semenuk rounded out the podium. But there was more to it than just another victory.

This weekend's victory allowed Canadian Rally Champion, L'Estage, to set the all-time record for CRC wins at 44. This bests the previous record, 43, set by John Buffum. He was the most successful U.S. rally driver ever, winning 11 national titles and 117 national championship events.

Buffum built the first open class Mitsubishi Evolution X, to run in the Rally America and Canadian Rally series. L’Estage got most of those 44 victories in a Mitsubishi EVO before making the switch to Subaru last year.

L’Estage downplayed the importance of setting a new record and kept the focus on winning the championship this year. "This is a very important win for us" says L'Estage. "It puts us back in the championship race after a tough first event. Thanks to Subaru Canada and Rocket Rally. The car was flawless. Overall it is a big team win."

Next, the 2016 Subaru WRX STI driven by Antoine L'Estage and co-driver Darren Garrod heads to Richmond, QC for the Rallye Baie des Chaleurs on July 2-3. This victory is a little sweeter as L'Estage overtakes legendary driver John Buffum and gets the all-time record for CRC wins.