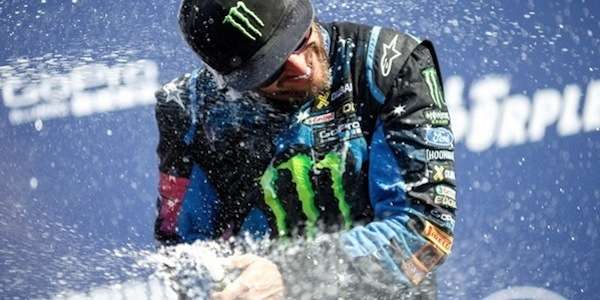 Ken Block in the #43 Hoonigan Racing Division Ford Fiesta ST rolled into Washington, DC as the points leader and after the race he extended his lead.
Advertisement

The seventh round event was sponsored by Volkswagen, but it was Ford who dominated at Red Bull Global Rallycross in Washington, DC. Points leader Ken Block driving the #43 Hoonigan Racing Division Ford Fiesta ST didn’t have a great day, but he made the podium with a third place finish and extended his points lead in GRC.

Block took his fifth podium of the season at Saturday’s challenging GRC race that was held in the parking lot of JFK Stadium. Block placed third in the Supercar Final and he has podiumed in every race this season except for Daytona I and Detroit II. Block was able to extend his lead over Sebastian Eriksson by 41 points to hold on to the points lead with 302.

This was the fastest track this season with an all-asphalt track except for one big jump with a dirt landing. It was Nelson Piquet Jr.,(#07 SH Racing Rallycross Ford Fiesta ST) who topped the Supercar podium for the first time this season and was able to hold off defending Washington, DC race winner Patrik Sandell (#18 Bryan Herta Rallysport Ford Fiesta ST) and Ken Block to take the victory. The Final was another exciting race as Piquet jumped out in front and never relinquished the lead.

The first half of the 10-car eight-lap Final was dominated by a three-way battle for third, with Ken Block, Tanner Foust, and Steve Arpin. Sandell chased Piquet for the entire race and made contact from behind in the final laps pushing in Piquet’s fender and leading to a tire rub. With the tire smoking, Piquet pushed hard and held on to the top spot for the final lap to take his first victory in a Supercar Final.

After the Final, Ken Block said, “Really, we were struggling this weekend, the team and I worked really hard, especially the crew, to really try and figure out the setup. It got better and better and better, and by the end I was a lot more comfortable with what we were doing out there. I just really wanted to come away with a better result than what we ended up with in the last Detroit race. Really I couldn’t ask for anything better at this point, we’re in this for the championship win so it’s good to come away with a podium and extending the lead.”

Subaru Rally Team USA was noticeably absent from Washington DC GRC and Subaru Tecnica International (STI) is sponsoring the next GRC event in LA. and getting ready for a major assault. Subaru will bring four Subaru WRX STI GRC cars with the addition of David Higgins and Travis Pastrana joining the team.

Rob Weir, Motorsports Manager for Subaru told Torque News, “LA is the next stop for Subaru Rally Team USA, since we are preparing a four-car assault on the LA double-header race that is now less than a month away. Subaru Tecnica International is very excited to present LA as the premier event of the GRC season. It’s going to be a spectacular event for TV and the for the fans who attend.” Stay tuned for the Subaru WRX STI assault.