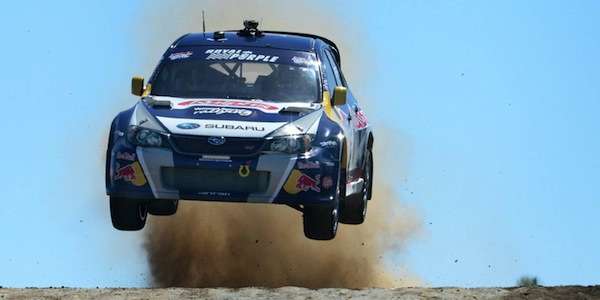 This will be the first time since 2012 that Subaru has entered four WRX STIs in the championship field. David Higgins and Travis Pastrana have won a combined 11 national stage rally championships in the United States, plus multiple X Games medals driving for Subaru. The reason Subaru will bring four cars to the event is because Subaru Tecnica International (STI) is the presenting sponsor.

STI will sponsor the LA event

STI, who is the motorsport division for Subaru, will be the presenting sponsor of the Red Bull Global Rallycross doubleheader event at the Port of Los Angeles for the eighth and ninth rounds of the 2015 championship. Subaru Motorsports Marketing Manager Rob Weir said, “With Subaru Tecnica International, we’re going to put on an unforgettable weekend for the fans.”

The 2015 Subaru WRX STI GRC cars are new this season and have been co-developed by Vermont SportsCar and Subaru Tecnica International. They’re powered by a 2.0-liter turbocharged Subaru Boxer producing nearly 600hp and come mated to a Sadev six-speed sequential transmission, all-wheel drive, and run on METHOD Race Wheels. The STIs will launch off the starting line from 0-60 mph in two seconds.

It hasn’t been a good year for SRT USA as the team has struggled this year with the all-new 2015 Subaru WRX STIs. Both Bucky Lasek and Sverre Isachsen are down in the driver championship standings with Lasek having only 51 points and Isachsen with 76 points. Travis Pastrana entered X Games Austin, was running strong in third place until he broke a steering arm and went out of the race.

Will Higgins and Pastrana in the Subaru WRX STIs be able to compete with GRC leaders Block, Eriksson and Dyne? The Red Bull Global Rallycross race on September 13 can be seen live at 4:00PM ET on NBC. Stay tuned.