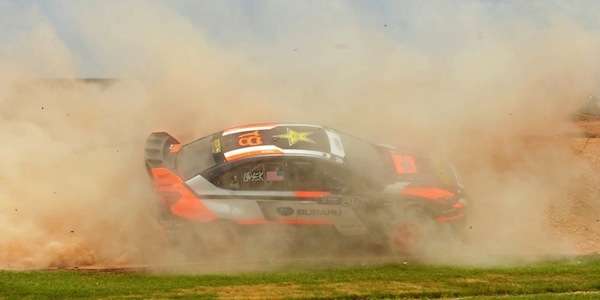 All three Subaru STIs get dusted at X Games Austin

The two 2015 Subaru WRX STI GRC cars and Pastrana’s 2014 WRX STI get no medals at X Games. What happened in Austin?
Advertisement

The Red Bull Global Rallycross at X Games Austin does not count any points for the GRC season, but teams and drivers want a medal badly. Just ask Ken Block who was so close to advancing to the LCQ if he wanted a Gold medal. Subaru had three cars at the X Games with Bucky Lasek and Sverre Isachsen driving the two new 2015 Subaru WRX STI GRC cars and Travis Pastrana drove a 2014 WRX STI that had been updated from last year. None of the STIs made it to the final and were eliminated in earlier rounds for various reasons.

Friday was a day of practice and saw Isachsen and Pastrana each put in an hour on the track to get familiar with the course. Lasek was off competing in the skateboard vert competition and had no practice time. Last year Lasek got a Silver medal at this event in the 2014 WRX STI. During qualifying, Isachsen put his 2015 Subaru WRX STI in the middle of the field, qualifying 8th with a time of 35.993 seconds. Lasek and Pastrana were farther behind their teammate.

For GRC Rallycross, competitors start the day with a short practice session, then after a break went into single rounds of elimination Heat races prior to the Last Change Qualifier (LCQ) and Final. The format for the X Games Rallycross leaves little room for error, with the winner of each of the three Heats being the only competitor to secure a spot on the Final starting grid. Second and third place are given a chance to earn a spot in the six car Final during the LCQ, while fourth and fifth being eliminated all together as Ken Block found out.

Isachsen and Pastrana were seated together in Heat 2, Travis in the second row, Sverre in the front row. Pastrana was running strong in third place until he broke a steering arm and went out. Isachsen fell behind, finished fourth and did not advance.

Lasek gets lucky in Heat 1

Lasek was lucky in Heat 1, passing Ken Block who had spun out after leading on the final corner. Lasek was able to pass Block and moved up to third qualifying him for the LCQ. The LCQ saw Lasek start on the second row and the #81 2015 Subaru WRX STI sustained a notable amount of damage due to multiple hits by competitors. Lasek was only able to secure 4th, one position short of making the Final grid. It was another disappointing day for SRT USA and the new 2015 Subaru WRX STIs.

The first race of the Red Bull Global Rallycross season was a big disappointment for the 2015 Subaru WRX STI. Last weekend in Ft. Lauderdale, Florida, Bucky Lasek and Sverre Isachsen finished near the bottom of the pack. This was the coming out party for the all-new 2015 STI GRC cars and they were hoping to...read more.

SRT USA and the 2015 Subaru WRX STIs head next to Florida for a double-header round of the Red Bull GRC Championship in Daytona on June 20-21st. Stay tuned.