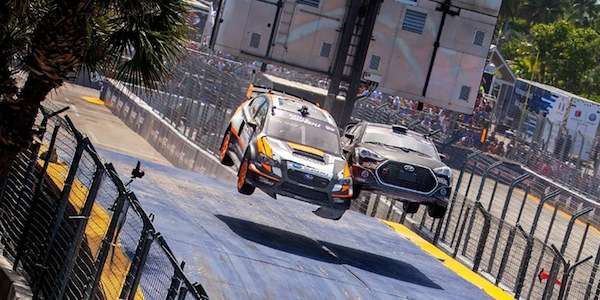 Subaru’s two 2015 Subaru WRX STI Global Rallycross cars finished near the bottom of the standings this weekend. What happened to the new 2015 STIs?
Advertisement

The first race of the Red Bull Global Rallycross season was a big disappointment for the 2015 Subaru WRX STI. This weekend in Ft. Lauderdale, Florida, Bucky Lasek and Sverre Isachsen finished near the bottom of the pack. This was the coming out party for the all-new 2015 STI GRC cars and they were hoping to have a good showing in the first race.

Day one saw limited action as the cars were scheduled for only a single set of competitive heats. Lasek had a good showing in heat 1C as he was able to overtake two of the three cars that started ahead of him on the first row. Lasek passed then Joni Wiman by taking the joker. Lasek, recalled, “The start was great with a good launch, I put myself right up there behind Wiman. Then I was bumped into the back of him; the initial hit from getting pushed into him damaged my intercooler and intake pipes.” Lasek had to settle for 3rd due to the damage to the 2015 STI.

Subaru believes that STI’s involvement with SRT USA will pay big dividends this season. Rob Weir, Subaru Motorsports Marketing Manager says, “The technical collaboration between Vermont SportsCar and STI is beginning to show its fruits in testing. Compared to our last version of rallycross car, which took us to five podiums last year, the VT15x is a revolution in terms of...read more.

Ft. Lauderdale is challenging and narrow

The 0.43 mile street course at Ft. Lauderdale is 80% tarmac and is challenging and narrow offering limited passing opportunities. It’s difficult for cars starting farther back in the pack. On day two, both Isachsen and Lasek secured spots on the grid for the final after a second and third place finish in the Last Chance Qualifier (LCQ). Both 2015 STIs started the main event on the second row giving them a chance at a podium finish.

Both drivers faced challenges in the 10 lap final as there was hard hitting in the mid-field battles. Lasek fell to the back of the pack and was forced out of the race after getting being pushed into the wall. He was forced to retire and didn’t finish the race.

Isachsen in the #81 Subaru WRX STI advanced to fifth place by turn one and held this position for five laps before damage from a hard landing on the 210 foot monster jump on turn 3 forced him to slow down. He continued to push despite the damage, but eventually spun out on the final lap forfeiting his placement to the pursuing competitors.

The final results saw Ken Block win his first ever first round of GRC. Scott Speed finished second and Nelson Piquet Jr. took the third spot on the podium. It was a disappointing start for Subaru Rally Team USA but the team hopes to learn from this weekend and will be ready for round two of Red Bull GRC which is a doubleheader at Daytona International Speedway on June 19-21.

Red Bull Global Rallycross heads to the Circuit of the Americas next for X Games Austin June 4-7, a non-points, invitational round on the 2015 schedule. Stay tuned.

Patrick Rall wrote on June 1, 2015 - 3:36pm Permalink
Subaru needs to give up their GRC run and stick to stage rally, where there is no real competition for Higgins. Their GRC drivers are second rate at best, but even when Higgins was running GRC a few years back, he was rarely competitive.