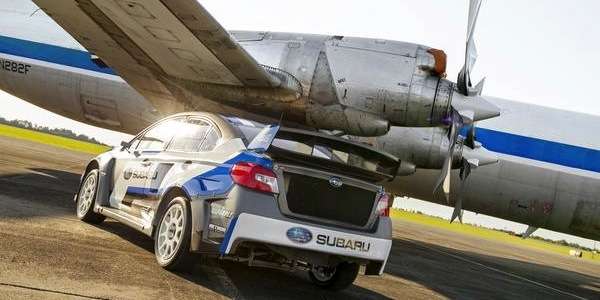 The 2015 Subaru WRX STI GRC car gets thoroughly tested by Lasek and Isachsen. What big changes will GRC fans see in the STI?
Advertisement

Subaru Rally Team USA (SRT USA) says they have completed pre-season testing of the new 2015 Subaru WRX STI (dubbed the VT15x) rallycross car. The team is getting ready for the start of the Red Bull Global Rallycross Championship round set for May 31 in Ft. Lauderdale, FL.

It’s very fitting that SRT USA shot the new 2015 STI GRC next to an airplane. Fuji Heavy Industries, manufacturer of Subaru automobiles, started in the aircraft industry back in 1917. The new 2015 GRC STI will also be literally flying this season as the two new cars are involved in 12 GRC race events in 2015.

What does STI's involvement mean for SRT USA?

STI is currently involved with motorsports in Japan with the Subaru BRZ GT300 in the SUPER GT series and they also run the 2015 Subaru WRX STI at the Nurburgring 24-hr race. Now they are bringing their technical knowledge to Subaru’s U.S. GRC race program.

Because Subaru Tecnica International (STI) has “stepped up” their technical support of SRT USA, the new 2015 Subaru WRX STI dubbed the VT15x is capable of 0-60 in just two seconds. That’s lightning quick and will help Bucky Lasek and Sverre Isachsen launch their new 2015 STI Global Rallycross car off the line quicker than ever at the 12 GRC race events in 2015.

Based on the 2015 Subaru WRX STI production car

The 2015 WRX STI Global Rallycross car started life as a production STI then receives extensive upgrades to the driveline, suspension, and aerodynamics creating an STI that can handle pavement, dirt, and jumps. Like its factory design, VT15x features a turbocharged Subaru boxer engine and all-wheel drive. The car has been under development for the past 12 months.

SRT USA revealed the new car in Bucky Lasek’s new livery at NYIAS and the new STI GRC is powered by a 2.0-liter Subaru Boxer engine producing 580 horsepower, it’s coupled to a 6-speed SADEV sequential gearbox and power is sent to all four wheels through Subaru’s all-wheel drive system. Other features include a...read more.

Subaru believes that STI’s involvement with SRT USA will pay big dividends this season. Rob Weir, Subaru Motorsports Marketing Manager says, “The technical collaboration between Vermont SportsCar and STI is beginning to show its fruits in testing. Compared to our last version of rallycross car, which took us to five podiums last year, the VT15x is a revolution in terms of outright speed and maneuverability.”

Bucky Lasek is pumped to get the season started and is ready to fly in the new 2015 Subaru WRX STI GRC car. Lasek has put in 300 laps of pre-season testing in his new STI preparing for the GRC season. “This new STI is such a great car,” said Lasek. “The power and handling is amazing, it’s much easier to push to its limits around a rallycross track. She flies nice too!”

Travis Pastrana who joined the team last year for select races will compete in the 2014 WRX STI rallycross car he ran last season with new performance upgrades until his VT15x is completed. Pastrana was also at the Florida International Rally and Motorsports School getting his car covered in dirt getting ready for the season.

The all-new 2015 Subaru WRX STI Global Rallycross cars will be flying as they make their debut at Red Bull Rallycross May 31 in Ft. Lauderdale, FL. Stay tuned.