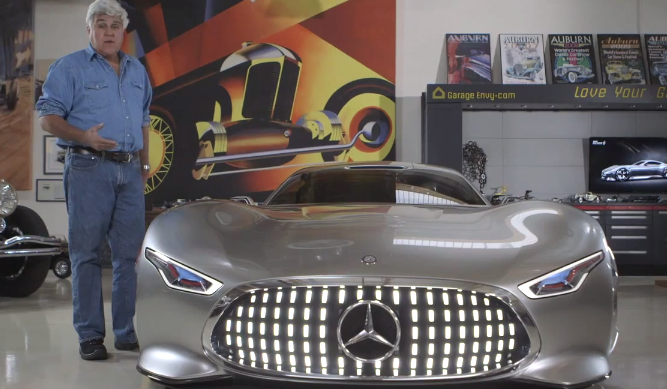 The Mercedes-Benz AMG Vision Gran Turismo arrives at Jay Leno’s Garage and he also gives us a drive in his 1076 hp 1966 Toronado. Both go virtual in Gran Turismo 6.
Advertisement

What does Jay Leno’s 1076 hp 1966 Oldsmobile Toronado and the Mercedes-Benz AMG Vision Gran Turismo have in common? You can drive a virtual version of both these amazing cars in the new Gran Turismo 6 that just launched on December 6. Jay's 1966 Oldsmobile Toronado was recreated for the game and the Mercedes-Benz concept supercar was designed specifically for the game.

But Leno gets bestowed a great honor for the new Gran Turismo 6 video game. Leno’s custom-built 1966 Oldsmobile Toronado gets chosen to be in the virtual game. Leno’s 1966 Oldsmobile Toronado is heavily modified, rear wheel drive and comes with 1076 horsepower. The 427 Chevrolet engine sports twin turbochargers and is scary fast for a 4000 lb car. Leno says, “It’s like a giant sports car on steroids”

The Japanese developers of the game put the big Toronado in the new Gran Turismo 6 video game. Leno gets to test drive the virtual car and is definitely impressed with graphics and the real feel of his car in the game. He thinks they nailed the car pretty good.

The founder and producer of Gran Turismo series Kazunori Yamauchi, drove Leno’s car in real life to set it up for the game. He said it’s not easy to drive without the tail sliding. When Leno drives the car, he likes what Yamauchi, has created in the virtual world of gaming.

But Leno is even more impressed with the Mercedes-Benz AMG Vision Gran Turismo that they brought to his shop. Gordon Wagener, Vice President Design Daimler AG, explains the design of the new supercar in the video below.

The impressive-looking supercar was designed specifically for the game. The car generates new ideas for Mercedes-AMG and he says the car is not that far from reality. Maybe this will be the next SLS? Wagener says the next-generation SLS coming out next year will “carry some of the flavor” of the Mercedes-Benz Gran Turismo Vision Concept car.