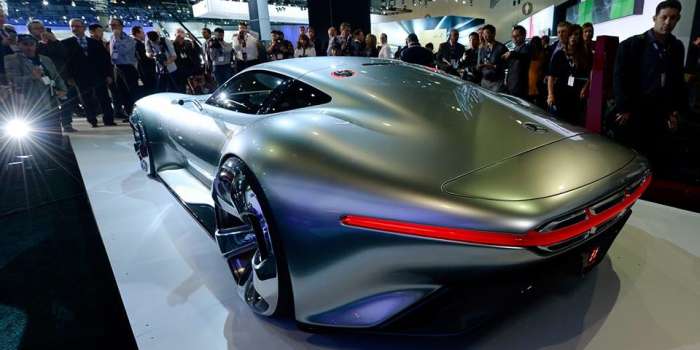 The Gran Turismo 6 launches today and Mercedes-Benz will be bringing the AMG Vision Gran Turismo.
Advertisement

The all-new Mercedes-Benz AMG Vision Gran Turismo made its global debut at the LA Auto Show 2013 and it looks magnificent. It was one of the biggest hits at the show and is a stunning example of Mercedes-Benz innovation. It will appear at some point in the new Gran Turismo 6 video game which goes on sale today, December 6.

Polyphony Digital Inc., creator of PlayStation’s best-selling Gran Turismo franchise, has announced a unique partnership with a number of leading automotive manufacturers, design houses and other leading global brands. Design teams from the major automakers including Mercedes-Benz, will create concept models giving a unique insight into the future of the automotive sector.

Their designs will then be recreated as working cars for the new Gran Turismo 6 game due for release today. The initiative celebrates 15 years of the 70-million-selling franchise and is known as "Vision Gran Turismo".

The Mercedes team who designed the Mercedes-Benz AMG Vision Gran Turismo didn’t have much time from start to finish. But it was more than just a gaming car on the drawing board. They had to build a real model that had to be ready for the LA Auto Show.

The team worked together and inspired each other to dream big. The deadline was short and the team missed meals and worked late into the night to complete the project. The sound design was just as important as the exterior design. The car will be in a competition with the other cars to be selected by the gamers who will be driving the vehicles.

The goal was to create something that was better than any of the others. And it may even go beyond the Gran Turismo 6 game. We could see something like this on the street in the future. We’ve now seen the final result when it was unveiled in LA last month. Now it’s ready for Gran Turismo 6 that launches today.

But what inspired the design of the Mercedes-Benz AMG Vision Gran Turismo? For the answer, watch some of the designers who made it happen. They'll take you over the Vision GT's chromium curves and the thinking behind them and what may or may not be seen someday in an actual Mercedes-AMG production car.

Toyota vs Tesla: Which Stock To Buy These Days
For Some Former Daimler Managers Daimler Is Authority, While Tesla Is Like a Startup
END_OF_DOCUMENT_TOKEN_TO_BE_REPLACED