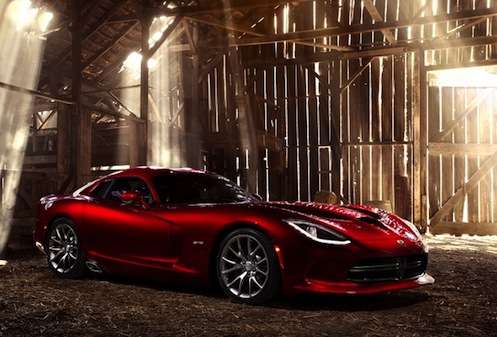 Jay Leno falls in love with the 2013 SRT Viper [Video]

Jay Leno gets paid a visit from the 2013 SRT Viper GTS and it’s an understatement to say he likes the car.
Advertisement

Jay Leno has a garage full of over 100 cars and the same number of motorcycles in his collection. But he has a special place in his heart for the Viper. In this weeks edition of Jay Leno’s Garage, he gets to talk to the Director of Marketing and the Head of Design at SRT, and they brought along the original SRT Viper GTS that was unveiled at the New York Auto Show.

Leno has been a fan of the Viper for twenty years and owns one of the first 1993 Dodge Viper models that was produced. The car is an icon with its 400 horsepower engine and unique design. He also owns a Blue 1996 Dodge Viper coupe with white racing stripes. It’s no secret that Leno loves cars, but you can tell from the 12 minute video below that the television host and comedian has a special love for the Viper.

The 2013 SRT Viper GTS that has been featured on the cover of thousands of magazine’s and on the internet was brought to Jay Leno’s Garage for the show. Beth Paretta, who is the Director of Marketing and Operations SRT, and Mark Trostle, Head of Design SRT brought the car for Leno to inspect.

Leno has a hard time containing his enthusiasm for the SRT Viper GTS and who could blame him. The supercar as Leno points out, is about a third of the cost of a Lamborghini or a Ferrari, yet it has all the power and technology of the world’s fastest supercars. The 2013 SRT Viper comes with a 8.4-liter V-10 engine pumping out 640 horsepower and 600 lb. ft. of torque to propel it down the track. The car is light and weights in at just under 3300 pounds.

As Beth Paretta points out, SRT is a new brand for Chrysler in which the 2013 Viper is the flagship. It also includes the SRT Challenger, SRT Charger, Chrysler 300 SRT, and the Jeep Grand Cherokee SRT. And the SRT brand is not done yet, as there will be other cars introduced in the near future.

New details leaked during the interview

Any fan of performance cars would love to have the opportunity to talk with two of the developers of the car. Most of the SRT Viper’s details have already been announced, but as often happens, Paretta and Trostle revealed some interesting insights in their interview with Leno. Leno asks Paretta about pricing on the SRT Viper and she mentions that pricing will start above $110k. While pricing is yet to be finalized, she was most likely referring to the top of the line 2013 SRT Viper GTS, which means the SRT Viper base model could come in just under $100,000.

Unfortunately, since this is the original pre-production pilot car, they didn’t let him drive the valuable supercar. But you can be certain, Jay Leno will drive the 2013 SRT Viper GTS on a future program and will probably own one for himself.