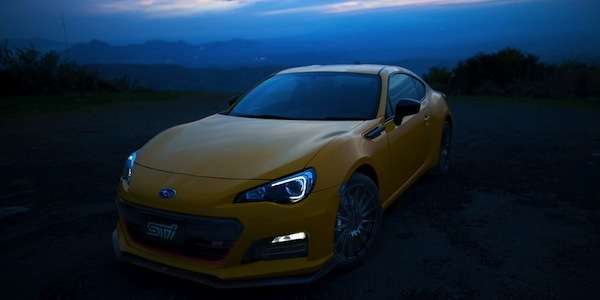 Subaru is introducing a new BRZ STI in the Japan market on June 30. Is this the BRZ STI fans have been waiting for?
Advertisement

Subaru Tecnica International (STI) will introduce a new 2016 Subaru BRZ STI on June 30, 2015 for the Japan market. We don’t many details, but it will likely be the BRZ tS that the Japan market has seen in the past. It does look a lot like the BRZ tS Concept Subaru brought to the Auto Messe 2015 in Osaka Japan in February.

New 2016 BRZ will get STI upgrades

That Sunrise Yellow concept car came with special upgrades on the body, underneath and inside the cabin and the new 2016 production model will get similar performance modifications. Outside it featured an STI aero kit, front under spoiler and 18-inch custom STI wheels wrapped in Michelin PSS performance tires. Underneath, the BRZ tS Concept was upgraded with an STI suspension, STI Sport exhaust, large diameter driveshaft, Bilstein shocks, STI springs and Brembo brakes on the corners.

Subaru has decided to wait for now on bringing out the full performance BRZ with upgrades to the engine. For now, we’ll have to settle for STI’s chassis upgrades that will come on the new BRZ tS. The handling and driving dynamics will be improved by STI who manages motorsport activities for Subaru. What they have learned through their motorsports involvement will be transferred to this new production BRZ. Subaru released a similar BRZ tS in...read more.

STI upgrades in the cabin

On the inside, the BRZ sports coupe will come with Recaro performance seats with STI logo, leather tS steering wheel, performance STI gauges, Panasonic audio and navigation and STI trim throughout the cabin.

STI will expand their influence in the U.S. with more STI tuned production cars like the BRZ tS and Forester tS that the Japanese automaker announced at the 2015 New York Auto show earlier this year. This BRZ tS (tuned by STI) could be what North American performance fans can expect to see in the next two years.

The BRZ tS Concept introduced in February was still powered by the FA20 2.0-liter naturally aspirated 200hp boxer engine that comes in the current generation production coupes. Subaru and Subaru Tecnica International will introduce this new Subaru BRZ STI on June 30, 2015. What will be under the hood of the Sunrise Yellow 2016 Subaru BRZ STI? Stay tuned.