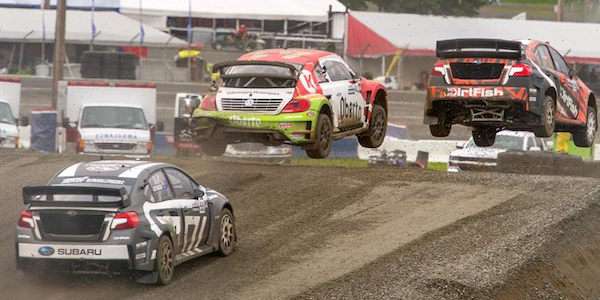 The Subaru WRX STI Global Rallycross cars both made the Final in Seattle. How did the team finish?
Advertisement

Bucky Lasek and Sverre Isachsen were not be behind the wheel of the Subaru WRX STI GRC cars. It was David Higgins and new Australian WRC driver, Chris Atkinson driving for Subaru Rally Team USA at the Seattle GRC event.

A wet and rainy day in Seattle made the Red Bull Global Rallycross event challenging for the Subaru WRX STI GRC cars this weekend. On Day 2, both Chris Atkinson and David Higgins ran a good race in the Semi-finals and finished 2nd and 3rd respectively to advance in good shape for the Final.

Things were looking good for Subaru

The 0.79 mile course was wet from the storms and the 20 percent dirt portion was full of ruts as the 600hp GRC cars dug in and destroyed the track. Subaru Rally Team USA and Subaru Tecnica International techs had plenty of time to get the two STIs ready for the 10 car final.

The rain didn’t deter the local Seattle Global Rallycross fans from packing into the stands at Evergreen Speedway in Monroe, Washington to catch the action. As the 10 supercars pulled out for the Final, the fans in the stands were buzzing with excitement.

David Higgins launched his #75 Subaru WRX STI off the line from row 2 and had a great start. He was in 4th place on Lap 3 and running hard when he developed a drive shaft problem due to the rough conditions. This slowed the champion rally driver’s pace and ultimately he finished 9th overall.

Chris Atkinson’s #55 WRX STI was on the front line for the Final and in good shape to challenge VW and Ford. However, the Subaru driver had an uncharacteristically poor start and stalled off the line. By the time he got the STI going, Atkinson was at the back of the pack. He pushed the WRX STI hard and ultimately finished the 10 lap Final in 6th place.

This was Atkinson’s second GRC event and the team was pleased with the progress made by the Rallycross driver with the little experience he has. Subaru will bring the two WRX STI GRC cars to Los Angeles, to finish out the Red Bull GRC season on October 8-9 for the final two rounds. Who will be driving? Stay tuned.