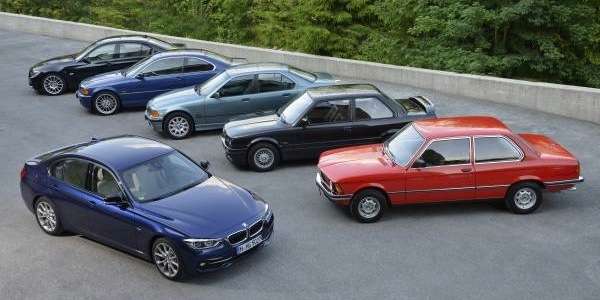 How the new 2016 BMW 3 Series gets better with age

The new 2016 BMW 3 Series is the sixth-generation car and it’s better than ever. What are 3 things that will keep it at the top of its game?
Advertisement

The original 3 Series has been around since 1975 and is celebration 40 years of sporty driving dynamics. The new 2016 BMW 3 Series keeps that tradition going with 3 things that will keep it at the top. The 3 Series is as impressive as ever and gets a dynamic design, unrivaled agility and excellent everyday practicality. The new 2016 3 Series has optimum weight distribution, rear-wheel drive and a new 3.0-liter in-line six-cylinder TwinPower Turbo gas engine in the 340i. Performance enthusiasts can also get the M Sport package options to adapt the new 3 Series Sedan for even more dynamic driving performance.

The 3 Series is the best-selling BMW of all time continues and continues to lead the way within its segment. The classic 3 Series design elements feature a long hood, short overhangs, long wheelbase and set-back passenger compartment. For the first time, double round headlights with integrated corona rings are available in LED technology as an option. The rear also gets LED technology as the taillights are set wide apart, ensuring that the new Sedan has an unmistakable appearance at night.

The new 3 Series sedan features a redeveloped chassis making it more dynamic and more agile than ever before. It now features an optional Adaptive M suspension or variable sport steering for driving enthusiasts. BMW says steering precision has been improved, rolling movements reduced and directional stability optimized on the new sedan. The 8-speed automatic transmission features a SPORT mode for configuring the gear shifts for the best possible performance.

The new 2016 BMW 3 Series gets a new 6-cylinder gasoline powerplant that will be featured in the 340i. This new 3.0-liter engine replaces the N55 powered 335i and tops the 3 Series gasoline line-up. The engine is lightweight and is an all-aluminum unit and uses BMW’s TwinPower Turbo technology. It produces 320hp, a 20 horsepower improvement over the previous model. Peak torque is an impressive 330 lb-ft. The new inline 6-cylinder engine features twin-scroll turbocharger, High Precision Injection and Double-VANOS variable camshaft timing. It also incorporates Valvetronic fully variable valve lift. The 2016 BMW 340i Sedan accelerates from 0-60 mph in just 4.8 seconds while the BMW 340i xDrive model takes just 4.6 seconds. All 340i models have an a limited top speed of 155 mph when equipped with performance tires.

The BMW 3 Series continues to be the car that defines the brand and it’s the most successful BMW of all-time. BMW has not forgotten what their core values are and have kept the new 2016 BMW 3 Series responsive, fun to drive and connected to the driver. It’s what will keep the 3 Series at the top of its game.