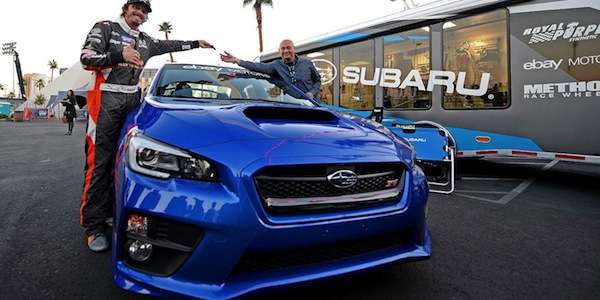 Why is Bucky Lasek handing the keys to a new 2015 Subaru WRX STI to this lucky winner?
Advertisement

A very lucky winner received the keys to a new 2015 Subaru WRX STI Launch Edition on Day one of the Red Bull Global Rallycross in Las Vegas. It was all part of an eBay Motors and SRT USA sweepstakes to help promote the new official sponsorship of eBay and Subaru’s Rally Team USA. Rick Escueta was the lucky winner and drove away in a new 2015 WR Blue Pearl WRX STI Launch Edition performance car.

One 2015 WRX STI Launch Edition was set aside

Subaru Rally Team USA set one of these 2015 WRX STIs aside and they guarded this Launch Edition sweepstakes car at the team's shop in Colchester, Vermont for this lucky fan. Lasek personally delivered the car to Escueta and the SRT USA team hosted him at the Las Vegas GRC race this week.

What did he do to win?

In order to win, Rick Escueta needed to add a vehicle profile to eBay Garage to be eligible for the sweepstakes which counted as an entry. He could add photos to the vehicle profile to receive additional entries. If he shared profile images via the social share feature he received one more entry per view. He listed his personal vehicle for sale on eBay and was the lucky winner of the new 2015 WRX STI.

A new 2015 WRX STI Launch Edition is the prize

Escueta was handed the keys to a new 2015 WRX STI Launch Edition that was equipped with gold-finished forged alloy wheels and the WR Blue Pearl exterior paint that is a combination long associated with Subaru competition rally cars. Only 1000 of the special edition cars were produced for the U.S. market and this is likely the last Launch Edition left as they are now all sold.

This new relationship with eBay Motors as a sponsor with the Subaru Rally Team USA gave them additional exposure throughout the Red Bull Global Rallycross Championship and Rally America Championship this past season. eBay Motors served as an official source of race coverage photos, driver and series info, race reports and other exclusive content from the team. GRC and Rally America fans were able to stay tuned to the eBay Motors blog, Facebook and Twitter and could get all of the latest news from the race teams. eBay Motors also served as the presenting sponsor of the team’s popular bi-weekly web video series “Launch Control.”

eBay and Subaru’s Rally Team USA gave the keys to Rick Escueta who was the lucky winner and drove away in a new 2015 WR Blue Pearl WRX STI Launch Edition performance car they had stashed away at the team's shop in Colchester, Vermont.