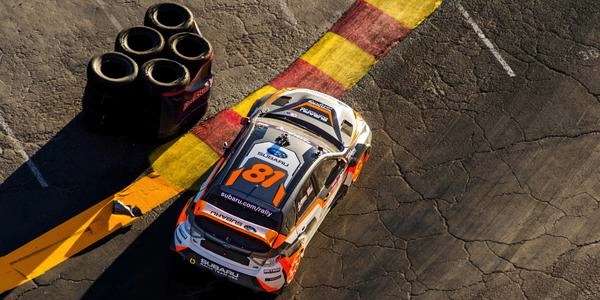 SRT USA closed out the 2014 Red Bull Global Rallycross Season in Las Vegas with another podium. Where did Lasek finish in his 2014 Subaru WRX STI?
Advertisement

Bucky Lasek ran a flawless final to stand on the podium again in the GRC finale at Las Vegas. This was the last race of the season and Subaru SRT USA finished with another podium finish in the Subaru WRX STI. In what was one of his best performances of the season, Lasek won in his semi-final race and then battled hard to take the third overall in the final.

Day one in Las Vegas

On day one, Bucky Lasek and Sverre Isachsen ran their Subaru WRX STI’s in the first heat races and came away with solid results in spite of having some setbacks. Lasek ended up 3rd and Sverre Isachsen 2nd in their respective heats on Tuesday. It was a good start for SRT USA and Bucky Lasek said after the days events, “We had great pace today. My Subaru is strong, the track is so much fun and I'm hungry as hell for a win!.”

The final at GRC

On day two, on the downtown Las Vegas track, it features a slippery dirt section in which Lasek, to the delight of the fans, made a daring pass on the outside on rival Scott Speed late their semi-final race to take an impressive victory in the semi-final. Then a flawless drive in the final earned Lasek his third podium of the season. SRT USA driver Teammate Sverre Isachsen came from the back of the ten-car grid in the final to earn fifth overall in his 2014 Subaru WRX STI.

Lasek explained at the finish, “A great way to end the season! Our Subaru was dialed and working well, we took some big hits today but were able to just keep going. The win in the semi-final was huge for me and set things up nicely for the final, being able to start on the front row. The team has worked so hard all season, it’s great to end the year with another podium.”

The podium in Las Vegas capped off a growth year for SRT USA which is managed by technical partner Vermont SportsCar. In Global RallyCross, the team earned five podiums including their maiden win at the Seattle GRC round last month by teammate Sverre Isachsen.

Ken Block won the finale, but Joni Wiman won the title as champion at Red Bull Global Rallycross Las Vegas at The LINQ. Block did everything he could to steal the title from the Finnish driver, but Wiman’s runner-up finish was good enough to earn the title by five points, the equivalent of a single finishing position over the entire season.

What’s next for SRT USA?

Rob Weir, Subaru Motorsports Marketing Manager was pleased with the progress the Subaru GRC team made this year. He said after the race, “The momentum we’ve felt all season within the team is now seen in front of the world out on the track. It’s a testament to hard work of our drivers and our technical partner Vermont SportsCar, combined with the capability of the WRX STI.”

Next season we look forward to seeing the new 2015 Subaru WRX STI GRC car as SRT USA will battle for the championship.