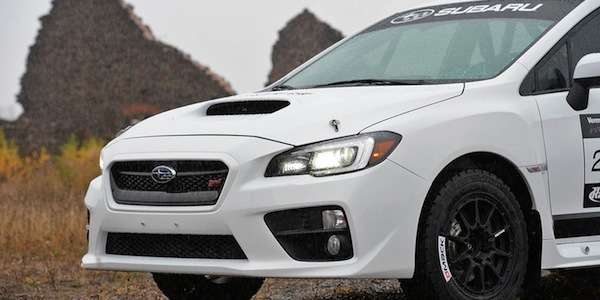 Subaru Rally Team USA announces the premiere of the new 2015 Subaru WRX STI rally car. Fans will get to see it in action next month.
Advertisement

Fans can mark their calendars now to see the all-new 2015 Subaru WRX STI Rally car on January 30. We knew it was coming and SRT USA has announced the arrival of the new-generation 2015 WRX STI and the schedule for the 2015 Rally America National Championship. David Higgins and Craig Drew will return to defend their Rally America Championship title with an all-new 2015 STI to build upon their successful 2014 season.

It should be another great year for SRT USA as the Vermont SportsCar rally car preparations will take the STI to a new level of performance. The 2015 WRX STI has already made its rally car premiere in the Canadian Rally Championship, and now Higgins and Drew will push their new car to new limits here in the U.S. starting in January at the Sno*Drift Rally Atlanta, MI.

Subaru gave fans a glimpse of the new 2015 WRX STI rally car at the Lake Superior Performance Rally in Houghton, Michigan in October, but the car did not compete during the weekend. Vermont SportsCar who builds the Rally cars and Global Rallycross performance cars for the Subaru Rally teams, has had a whole year with the new STI and it should be even better than the 2014 models fans saw in action this year.

There will eight events again next year and the points chase will take the cars and teams from coast-to-coast. There is one notable change in the schedule as the Olympus Rally will return on May 16-17. Here is a complete list of the events and dates for 2015. Mark your calendars and plan to attend these exciting Rally America National Championship events starting in January.

It will likely be another successful year for SRT USA as the Vermont SportsCar rally car preparations will take the all-new generation 2015 Subaru WRX STI to a new level of performance. David Higgins and Craig Drew will return to defend their Rally America Championship title in the new STI to build upon the last three championship seasons. Stay tuned.