Higgins and Drew are back. See how they win the Oregon Trail Rally in dominant fashion.
Advertisement

David Higgins and Craig Drew get their first win of the American Rally Association (ARA) season with a dominant performance in the 2019 Subaru WRX STI at Oregon Trail Rally. Higgins beat teammate Travis Pastrana who made his first appearance in the STI rally car this season. David Higgins and Travis Pastrana took the top two positions at this weekend’s event. Pastrana led early but was unable to fend off a relentless push from Higgins’ WRX STI on the event’s second day.

The two WRX STIs were separated by just a tenth of a second after the first two stages, but Higgins hit a rock on the second round and picked up a tire puncture that cost him valuable time. Travis Pastrana and co-driver Robbie Durant led David Higgins and Craig Drew by 12.7 seconds.

Higgins battled back in his WRX STI and when the dust settled, Higgins and Drew had swept all seven of the day one stages and took the lead by 6.1 seconds over Pastrana’s STI. Pastrana pushed a little too hard and spun out on Sunday giving Higgins an even bigger lead. Higgins could back off the torrid pace to get his first ARA victory. 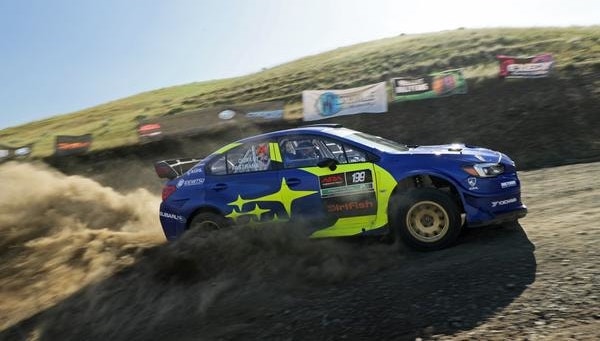 This was Pastrana’s first rally in nearly nine months but he showed a fast pace to come in second overall. Pastrana also took the title for the weekend’s longest jump, soaring 134 feet over the famous Boyd Loop hill.

Two 2019 Subaru WRX STI rally cars will be back at Idaho Rally June 22-23 where Higgins and Drew will battle teammates, Oliver Solberg, and Aaron Johnston, while Pastrana and Durant will return at August’s Ojibwe Forests Rally. Subaru Motorsports USA kicks off round one of the 2019 Americas Rallycross (ARX) season June 8-9 at the Mid-Ohio Sports Car Course. Stay tuned.

Denis Flierl wrote on June 4, 2019 - 6:17pm Permalink
Who is ready for Rallycross action this weekend?