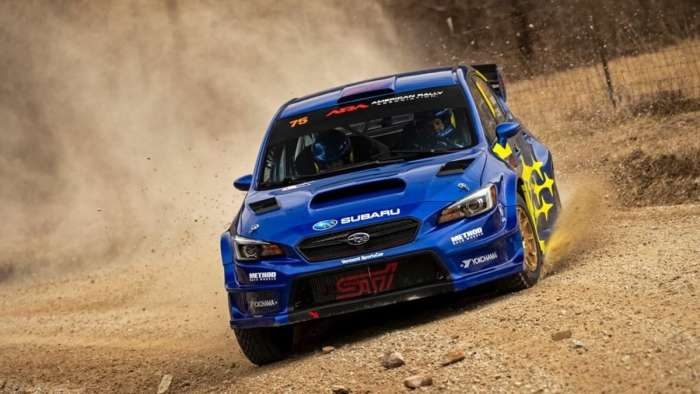 It was a weekend of unexpected trouble for the Subaru WRX STIs at 100 Acre Wood Rally. See where the two performance cars finished.
Advertisement

It was shaping up to be a great weekend of competition at the 100 Acre Wood Rally between David Higgins’s Subaru WRX STI and Ken Block’s Ford Escort Cosworth, but things went downhill after stage two. Ken Block and Alex Gelsomino were running 4th overall in their newly built Ford Escort Cosworth when they suffered an engine failure on stage three. The team did not re-enter the rally on Saturday.

So it was a battle between David Higgins and the new Subaru WRX STI driver Oliver Solberg. This weekend’s event is Solberg’s first time behind the wheel of the AWD STI on gravel, and he held second overall for much of the first day but suffered a tire blowout after hitting a large rock pulled out on stage by another competitor. They lost 1 minute and a fender to the flat.

Higgins and Drew ran strong to start their ARA championship title defense. The Subaru Motorsports crew won all but a single stage to end the day on Friday holding a 45 second lead to second place Barry McKenna and Leon Jordan. The M-Sport Ford Fiesta S2000 Turbo was quick in the corners, but just a few mph off on top speed. Oliver Solberg and Aaron Johnston in the #70 Subaru WRX STI were just 30 seconds back in third place after the flat tire slowed their pace.

Day two saw more trouble for the Subaru Motorsports USA WRX STI rally cars. Higgins #75 Subaru WRX STI led nearly the entire rally and were within sight of a dominating win when an electrical problem slowed them down with only three stages left in the race. With a healthy lead, the time lost only dropped the defending champs to 3rd, and they salvaged a podium finish. 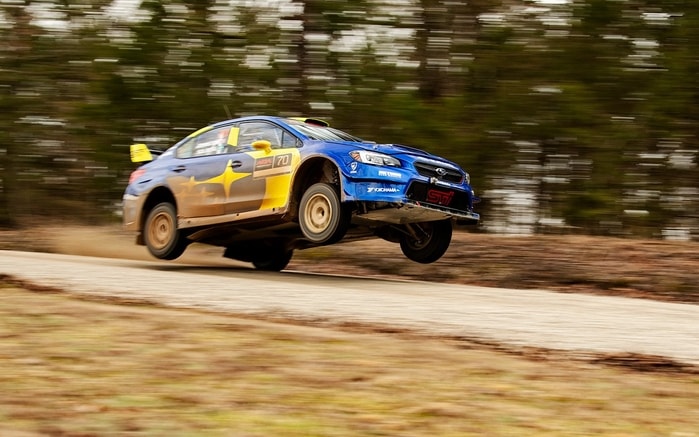 Oliver Solberg’s #70 Subaru WRX STI was running strong when the hood flew up on stage 12 after going over a crest and coming down hard. It broke the windshield and the team lost 20 seconds. Solberg moved up 2nd overall after Higgins lost lots of time with the electrical issues. Solberg ended up only 6.8 seconds off the win and won 6 out of the 16 stages and was happy in his debut in the #70 Subaru WRX STI.