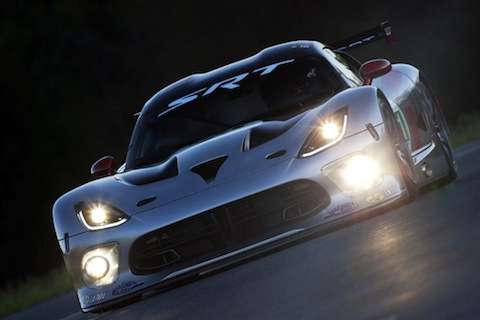 The very first prototype version of the 2013 SRT Viper was seen prowling the streets of Detroit on Monday with Ralph Gilles, president and CEO of the SRT Brand, behind the wheel.
Advertisement

The man most credited with resurrecting the SRT Viper, Ralph Gilles, President and CEO of SRT, and Senior Vice President of Chrysler Design, took to the streets of Detroit in the car that he dreamed about ever since it was discontinued in 2010. The 2013 SRT Viper stole the show at the recent New York Auto Show, with it’s 640-horsepower V-10 and extreme performance. Monday it turned heads on the streets of Detroit.

Gilles couldn’t help taking the very first SRT Viper prototype out to a breakfast meeting on Monday where he delivered a speech at a Detroit law firm. As he drove to the meeting, he was greeted with turning heads and cell phone flashes as he cruised the streets of Detroit. And you can just imagine the reaction he got from those attorney’s as he pulled up in the 8.4-liter V-10 road monster.

“Oh my god, what a sensation driving that car on the freeway,” said Gilles. “With the modern day cell phones everyone was almost crashing into me trying to take pictures.” It must have been a thrill for the CEO of Chrysler's Street and Racing Technology brand as he kicked the Vipers 640 horsepower and 600 lb. ft. of torque in the gas.

When asked at the NYIAS by Auto Blog, what it’s like to drive the 2013 SRT Viper, Gilles said, “As a driver, to me I think, it's taken me almost a decade to figure out how to drive that car, and I love driving it. But it shouldn't have to take a decade, you know? The new car, the mission for the team, was to make it so that any one can extract the best out of this car. It still has a bite to it, but it's subdued. But I'll tell you, this car is incredible, you wear this car, you don't manage it, you wear it”.

With Chrysler in serious financial trouble just a few years ago, it wasn’t easy for Gilles to bring the Viper back to life. It was cut from production in 2010 and labeled as too expensive and difficult to sell. But with the partnership with Fiat, Chrysler/Fiat CEO Sergio Marchionne returned the brand to stability and has reintroduced Viper under the SRT badge. Gilles said the company still has a lot of work to do on the manufacturing process for the Viper. “We are really quality focused right now,” Gilles said. “It’s not so much about rushing into the market. It’s really making sure its right.”

The SRT Viper will be built at Chrysler’s Conner Avenue Assembly Plant in Detroit that sat idle since 2010, but has recently been refurbished according to Gilles.

The high-performance sports car will reach showrooms during the fourth quarter of this year.

Tesla Giga Berlin's New Hurdle: It's Not Only the Gov't, but Now Tesla Itself
Teslas Are Sold Out Until 2023, But The Timing May Reverse
END_OF_DOCUMENT_TOKEN_TO_BE_REPLACED