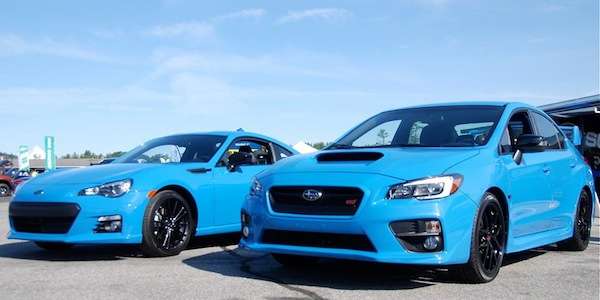 Subaru brought two new cars to the Wicked Big Meet this weekend. A 2016 Subaru WRX STI and a 2016 BRZ both in new Hyper Blue. Do you like the new color?
Advertisement

Subaru says they will bring out a new color on the 2015 WRX STI, 2016 WRX and 2016 BRZ this fall. Subaru brought a new Hyper Blue 2016 Subaru WRX STI and BRZ to the Wicked Big Meet this weekend that was held at the Stafford Motor Speedway in Stafford Springs, CT.

Subaru hasn’t made an official announcement on the Hyper Blue exterior color, but showed the 2016 STI and BRZ at the WBM event and put the cars on their Facebook page to show fans the new color.

In its 11th year, the all Subaru event drew thousands of Subaru fans who were also treated to Subaru Tecnica International (STI) cars like the class-winning 2015 Subaru WRX STI Nurburgring 24hr race car.

It was a perfect finish for the 2015 WRX STI at the Nurburgring. The team claimed its third NBR 24 hour victory in its class. Its finish in 18th position overall was the highest the team has ever achieved, and 143 laps was the highest number the team has ever recorded. Making it even more impressive was that the 2015 STI maintained the lead in its class throughout the entire race and was never overtaken by...read more.