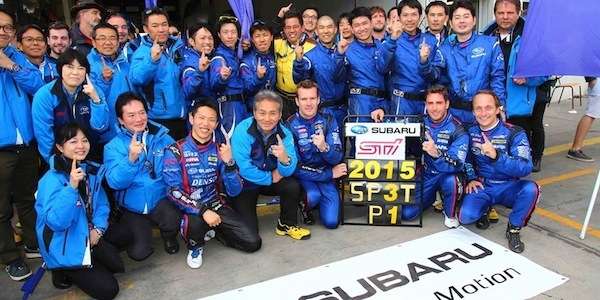 The STI team gets an impressive victory at the 2015 Nurburgring 24-hour race with the 2015 Subaru WRX STI NBR race car. How big was the win?
Advertisement

It takes a team effort to pull off a win at the Nurburgring 24-hour race and the Subaru Tecnica International (STI) team with the 2015 Subaru WRX STI did it in impressive fashion this weekend. It took a great effort by the team manager, drivers, mechanics and large support staff.

It was a perfect finish for the 2015 WRX STI at the Nurburgring. The team claimed its third NBR 24 hour victory in its class this afternoon. Its finish in 18th position overall was the highest the team has ever achieved, and 143 laps was the highest number the team has ever recorded. Making it even more impressive was that the 2015 STI maintained the lead in its class throughout the entire race and was never overtaken by a car in the same class.

The Nurburgring 24-hour race began under cloudy skies and rain. It was the same conditions when the 2015 Subaru WRX STI qualified number one in the SP3T class. After the first 12 laps, the 2015 STI was in 39th position overall and number one in class. The opening driver was Carlo van Dam, who kept up the pressure to maintain the lead. The first pit stop saw Japanese driver Hideki Yamauchi take the wheel.

After 35 laps had gone by, the rain had stopped and the new STI NBR moved up to 29th overall and still maintained the number one spot in SP3T. Almost 6 hours in, the track got darker as the race entered the hazardous night stage. Carlo van Dam was at the helm again following a great stint by Tim Schrick, racing with STI for the first time.

Night racing can be extremely dangerous

As night fell, 55 laps later, the STI was in 25th overall and still held the number one position in the SP3T class. Night racing can look spectacular from a spectators view, but up close it can be extremely dangerous. A number of incidents involving contact between other cars forced some teams out of the race.

This was the eighth consecutive year that STI and Subaru have participated and they looked forward to the challenge. The new car builds on the base car which is the 2015 WRX STI performance car, and gets improvements over last years NBR car...read more.

During the night, after 63 laps the team moved up to 22nd position overall and the team kept the STI in a commanding lead. As the sun came up Sunday morning, it was a perfect dawn under partly cloudy skies. “Pure WRX STI brilliance.” said STI on their Facebook page, “91 laps 20 position overall and number one in class”, they reported.

With 5 hours to go Carlo van Dam tweeted out on Twitter, “5hrs to go! with 8 laps in front, P20 overall.” After his last stint behind the wheel of the new 2015 STI, he tweeted, "The fact that a sedan like the WRX STI can chase after GT3 machines is amazing and so much fun!"

The technicians, hand-picked from Subaru dealers throughout Japan, kept the Subaru STI NBR in top condition throughout the grueling 24 hour race. The entire team’s tireless efforts payed off big this weekend with a victory. Subaru’s WRX STI finished in first place 37 minutes and 11 laps ahead of the second place Lexus RC. They were followed by the Audi TT RS, Audi TT RS 2.0, Seat Leon Supercopa and Ford Focus. The STI team gets an impressive victory at the 2015 Nurburgring 24-hour race with the 2015 Subaru WRX STI NBR race car.