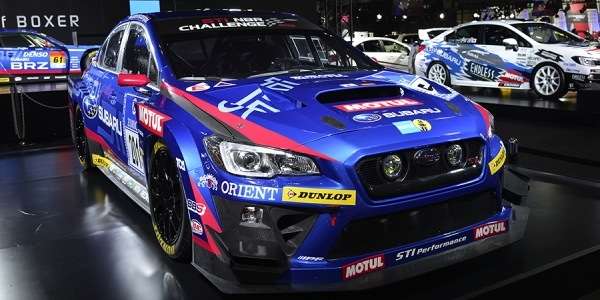 The new 2015 Subaru WRX STI NBR 24-hour race car has been unveiled at the Tokyo Auto Salon. It gets new upgrades.
Advertisement

Last year, the 2015 Subaru WRX STI NBR race team qualified in first place in their class and they knew they had a faster car than the previous year. The 24-hour Nurburgring race was a huge test for the all-new 2015 Subaru WRX STI. They couldn’t overcome an early morning mishap that cost them valuable time and they finished in fourth place in the grueling 24-hour event. The team learned some valuable information last year and will be back in 2015 with a newly-upgraded race car.

The all-new race car has just been unveiled at the Tokyo Auto Salon 2015. Fuji Heavy Industries Ltd. (FHI), the maker of Subaru automobiles, and Subaru Tecnica International Inc. (STI) their motorsports and performance division, unveiled the new racing car developed from the production 2015 WRX STI for the 24 Hours Nurburgring endurance race in 2015

STI will again participate in the Nurburgring 24-Hour race this year on May 14-17 in Germany. This will be the eight consecutive year that STI and Subaru have participated and they are looking forward to the challenge. The new car builds on the base car which is the 2015 WRX STI performance car, and gets improvements over last years NBR car.

STI says the new 2015 WRX STI NBR gets new enhancements that have improved the aerodynamics, stability and body rigidity. The 2.0-liter turbocharged boxer engine has also been enhanced and will have more output than last year. In addition, visibility for seeing the racing flags has also been improved by introducing a left-hand drive car.

A grueling 24 round boxing match

The team looks at the race like a fighter who climbs in the boxing ring for 15 rounds. But this race is longer than any boxing match and lasts for 24 long grueling rounds. Yoshio Hirakawa President STI, says,”The reason that Subaru participates in this race is that the world’s best cars, not just Japanese but also European cars, can climb into the same ring and duke it out in a competitive environment.”

Like last year, Hideharu Tatsumi will lead race operations as team manager, in addition to the development of the car. The drivers are Sasaki (Japan), Lasee (Germany), van Dam (Netherlands) and Tim Schrick (Germany), the winner of the 2014 VLN endurance racing championship, joins the team this year.

The 2015 Subaru WRX STI NBR car has been unveiled and it comes with new upgrades, the team has a new driver and a new attitude heading into the Nurburgring 24-Hour race this year, Stay tuned for updates as the STI team takes the new STI and hits the track to dial in the new car.