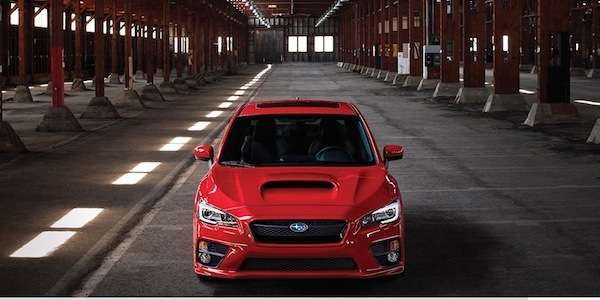 What are the most in-demand cars for dealers in America? The 2015 Subaru WRX shares a three-way tie for number one. What are the other two cars?
Advertisement

The new 2015 Subaru WRX is flying off dealer lots faster than any other car in the U.S. along with the 2015 Ford Mustang and Porsche Macan. Performance and luxury rules with U.S. buyers and dealers are having trouble keeping these popular cars on their lots. This is according to a story by Cars.com who ranked the most-wanted cars that are flying off dealer lots.

DON’T MISS: Subaru dealers wish for more 2015 WRX/STI to sell for the Holidays

Best November ever for WRX

November saw a new individual record for the new-generation 2015 Subaru WRX/STI performance sedans. This was the best November ever for the new-generation 2015 WRX/STI as more of the performance cars are arriving on North American shores. Performance enthusiasts have ordered the performance cars earlier in the year and many have waited months for their hot sedans to get here. Subaru dealers have very few in the showrooms to sell and could sell even more if they had them.

Outback is riding a high

In the U.S., Subaru sold more Outbacks than any other vehicle in their lineup in November. It shows how well consumers are responding to the newly-designed wagon. The Outback is reaching never before seen new heights and will likely continue as a top seller for the brand. Year to date it’s just behind the new Forester SUV.

Like the new 2015 Subaru WRX , the 2015 Ford Mustang and new 2015 Porsche Macan only hang around dealer lots for 10 days at a time. The new-generation Mustang has been a huge success and sales doubled Camaro totals in November and have seen a 62 percent increase over last year's sales. And the new Porsche Macan with its “base” Macan S ($49,900) and Macan Turbo ($72,300) with 400 horsepower and its 0-60 time of 4.6 seconds, is flying fast off dealer lots.

The new 2015 Subaru WRX performance sedan, 2015 Ford Mustang and 2015 Porsche Macan are hot sellers and dealers wish they had more to sell for the Holidays. With winter having its grip over most of the nation, the WRX and Macan feature all-wheel-drive to power through the snow and ice. Mustang is rear drive, but buyers aren’t waiting until spring to buy the new Stang.

mike wrote on December 23, 2014 - 5:01pm Permalink
Interesting story. Thanks.
mg wrote on December 24, 2014 - 1:58pm Permalink
I dont think this is accurate. According to Autonews.com the Mercedes CLA is the highly in demand and back ordered. They're sold as soon as they hit the dealers. That would be faster than any of these cars. Considering you report them selling after 11 days. CLA is selling before it gets to dealerships.
jay wrote on December 24, 2014 - 9:02pm Permalink
All of these cars also have many of their cars sold before they arrive, but the industry can't report them as sold until they are actually delivered to the customer. So if the owner can't pick the car up for a week, then that car sold in 7 days. As a Subaru retailer I can attest to the serious lack of wrx's to sell. For a while there we had a waiting list to order in the allocation that was 3-5 months away. Subaru is finally catching up.
JP wrote on January 6, 2015 - 5:45pm Permalink
Yeah ordered my WRX in July but it wasn't delivered to me until December. That's 5 mos! If they would've recorded the sale in July and then in Sept., I said, "F this keep my deposit I'll go buy a Ford Fiesta ST... as if." then their July sales numbers wouldn't have been accurate. So yeah it isn't until a customer takes delivery that a car can be "reported" as sold, and Subaru's WRX numbers the past two months and going forward will be higher because they are finally catching up to demand with their supply.
Peter Malone wrote on December 24, 2014 - 5:31pm Permalink
my 2005 Saab 9-2X looks a lot lim this 2015. I'll send you pictures if you want.
aaron wrote on February 3, 2015 - 5:48pm Permalink
Your saab is a 2005 wrx...

Tesla Contemplates A New Strategy for China Retail even As Sales Boom
Jay Leno on Elon Musk & EVs: “I Think He Should Get ... Credit"
END_OF_DOCUMENT_TOKEN_TO_BE_REPLACED