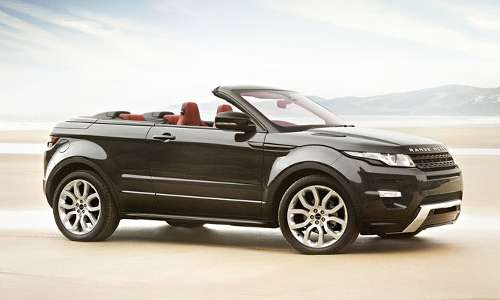 Evoque Convertible rolls into New York, will it ever see the light of production?

Land Rover celebrates 25 years in North America, and there’s no better way to celebrate than with a fun little convertible concept at the New York Auto Show. But will it ever be mass-produced?
Advertisement

The Range Rover Evoque convertible concept makes its entrance into the U.S. in New York at a good time as Land Rover celebrates the brand being in North America 25 years. Fresh off its world debut at the 2012 Geneva Auto Show, many believe the concept should never see the light of production and consider a convertible version ridiculous and even outright crazy.

But it looks like Land Rover is serious about testing the popularity of a two-door SUV convertible variant. Although Land Rover says the concept is strictly a design study and the chances of it being mass-produced are unlikely, some in the industry think the possibility is quite good we will see some version of the Evoque convertible in the future.

Even Land Rover design chief Gerry McGovern hints at the strong possibility. “The Range Rover Evoque lends itself beautifully to the idea of a convertible. This study is not a traditional convertible design execution – instead we have worked with the balance of the Range Rover Evoque’s lines to retain its distinctive shape and create something that is unique and, we believe, highly desirable.”

If the Range Rover Evoque convertible in fact gets the green light, it will be the world’s first premium compact convertible SUV. The concept is expected to have the identical running gear with its hardtop counterparts. The rag-top concept features a four-seat setup with a fully retractable roof and Roll Over Protection System (ROPS).

On the outside, the concept rides on 21-inch Titan silver wheels, and the exterior is finished in metallic Causeway Grey paint. Land Rover hasn’t provided specifications, but the company says "the new convertible body style has been achieved with minimal changes to weight and torsional rigidity."

The inside gets sport seats featuring lunar-and ivory-colored leather with contrasting stitching. Other cabin goodies include an 8-inch dual-view touch-screen and a Meridian stereo. Behind the rear seats is a cargo area that is accessed through a drop-down tailgate rather than the traditional hatch.
True to the Land Rover heritage, the convertible will be just as off-road capable as the rest of the brands lineup, and includes the Terrain Response system and surround-view camera.

Expanding the Land Rover brand to a wider audience, the Evoque proved to be a big success here in North America. Its been so well received that Tata Motors who owns Land Rover, had to hire an additional 1,000 workers to keep up with the demand. And the popular 2012 Range Rover Evoque has taken home another award at the New York Show by winning the 2012 World Design Car of the Year. Will an Evoque Convertible be next?

Keith Griffin wrote on April 9, 2012 - 2:44pm Permalink
During the NY Auto Show introduction another journalist leaned over to me and said, "Doesn't Land Rover know that Nissan was kidding when it introduced the Murano convertible?"