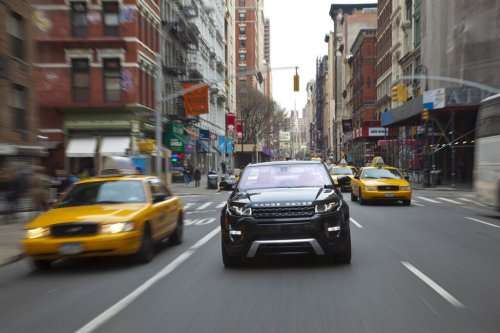 Land Rover celebrates 25 years in the U.S. at the New York Auto Show

At an exclusive dinner for loyal customers and press, Land Rover USA celebrated 25 years in North America, showing off its award-winning 2012 Range Rover Evoque and the 1987 Range Rover Classic that started it all. The DC100 Concept expedition edition was also there.
Advertisement

On Tuesday, at an exclusive dinner event for Land Rover North America celebrities, customers, and press, coinciding with the opening of the New York Auto Show to the press, the 1987 Range Rover Classic that began Land Rover's entrance into North America was shown. Alongside was the award-winning 2012 Range Rover Evoque and the new DC100 Concept with expedition equipment, showcasing the future design direction for the Land Rover Defender.

After an urban off-road adventure earlier in the day, the dinner capped off the 25th anniversary celebration. The company was founded in 1948 and entered the U.S. in 1987 with the Classic (then called simply the Range Rover).

It was the most expensive vehicle of its type, but soon caught on as the elite of the off-road expedition vehicles. Since then, more than 575,000 Land Rover vehicles have been sold in North America, making the U.S. the largest market for the SUVs. New York City is the company's largest metro market, making the celebration there all the more fitting.

On hand at the dinner event was Range Rover Brand Vice President Kim McCullough along with NFL star Bart Scott and TV personality Kelly Bensimon, all proud Land Rover owners. The event as held at The Park in New York's Chelsea neighborhood. The DC100 Concept with expedition equipment was for sure the star of the show, however, exploring possible design ideas for the future Land Rover Defender.

The Evoque is currently sold out and Land Rover has added another shift to try to keep up with demand for this top-of-the-line SUV.