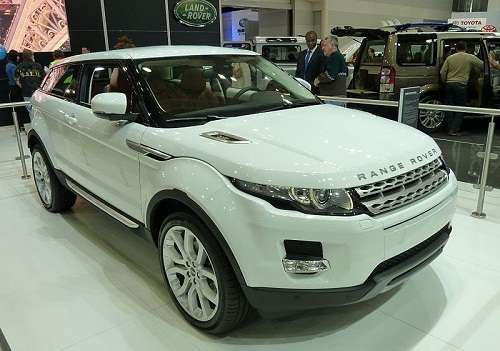 This year, the NAIAS pick for Truck of the Year is the Range Rover Evoque, a small, but capable and luxurious little SUV that began production in July, 2011. The win marks another upset in this usually American-dominated segment and award, though, interestingly, none of the Big 3 U.S. automakers was even on the competition's list for 2012.
Advertisement

The Range Rover Evoque (made by Land Rover) was pitted against fellow European models from BMW, Mercedes-Benz, Mini, and Saab along with Japanese entries from Honda and Nissan. The whole Truck of the Year lineup was made up of sport utilities, in fact. An unusual situation for NAIAS Truck of the Year.

This was in contrast to last year, where the competition was dominated by American trucks from Ford (the Explorer winning), Dodge, and Jeep. Further, a pickup truck has not won the competition since 2009 when the re-designed F-150 took the honors.

Despite the lack of American competition this year, the Evoque was a solid choice. The compact crossover SUV was introduced last year when it began production for 2012 sales, though the Rover's first debut was in 2008 at the NAIAS as a Land Rover LRX concept.

The Evoque carefully balances its smaller, more urban-friendly design with its off-road and upscale heritage, all while keeping fuel economy in mind. With biofuel capability, lightweight materials, and other aspects of Land Rover's e_Terrain technologies, the Evoque is a testament to luxurious eco-consciousness.

The win is also a big score for India's Tata, which purchased Land Rover from Ford in 2008, making this the first all-new vehicle design to go into production since Tata's ownership.

The U.S. doesn't completely lose out, however, as the Evoque utilizes the Ford EcoBoost 2.0-liter, 4-cylinder turbocharged gas engine and 6-speed automatic transmission giving it a 6.7 second 0-60mph time and EPA estimated 19mpg city and 28mpg highway. For a four-wheel drive, 4-door SUV, those numbers are impressive.

The Evoque has Rover's latest Terrain Response system for overall stability, traction, and hill descent control when off-road. Despite it's focus on luxury and diminutive size compared to other 4WD vehicles, the Evoque has a 215mm ground clearance and has been well-received by the automotive press for its all-terrain capabilities.

Available in two models stateside, the Evoque's win in Detroit is a definite boost to the Range Rover's prestige. It's also a wake up call to American automakers, who were distinctly absent from this year's competition.