Everyone Remembers the Iconic Subaru Brat, What About This Forester Woody

Everyone remembers the iconic Subaru Brat, but did you ever see the 1999 Forester Woody? Check out the latest Subaru Launch Control video...it’s more fun than most versions!
Advertisement

Subaru of America is celebrating 50 years in the U.S. in 2018, and they are starting to bring out some of their iconic vehicles ahead of time. Chris Atkinson says the Brat was the first car he ever drove in Australia when he 10 years old on his cousin’s farm. Patrik Sandell, growing up in Sweden, had never seen one before. Everyone remembers the Subaru Brat, but what about the 1999 Forester Woody Sandell is driving?

Unless you went to the Chicago Auto Show in 2010, you likely never saw the 1999 Subaru Forester Woody. Subaru’s small SUV was transformed into a “woody” as a concept vehicle and it was first unveiled at the 2010 Chicago Auto Show. It was a 1999 Forester model and had genuine Philippine mahogany and white ash wood veneers applied to the wagons doors and rear fender with special adhesive. 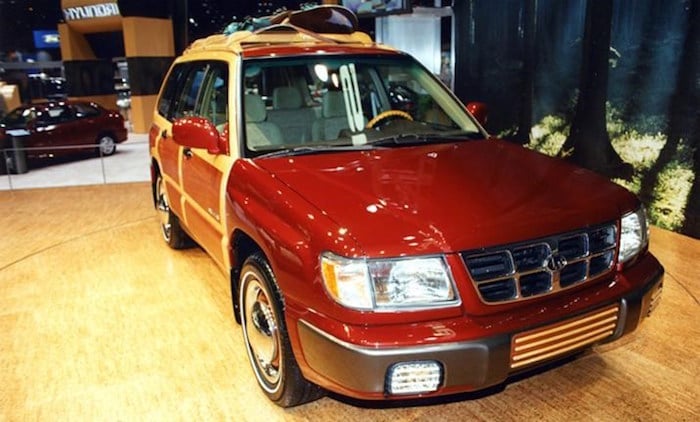 White ash was also used to construct the roof rack and as decorative strips on the driving lights and bumpers. Contributing to the classic look, were 'baby moon' hubcaps which Patrik Sandell was able to see himself in like a mirror. Inside, custom seating surfaces and door panels were tailored in a wicker cane-type texture on woven material.

Subaru pulled these two iconic vehicles out of moth balls and the Subaru Brat and Forester Woody are the perfect beach vehicles as the pair head out with their surf boards in the back of the Brat, and plastic swan in the Woody. I’m sure they received plenty of attention on the streets of Atlantic City in the two vintage Subaru cars. The pair have a little fun before the serious work of Global Rallycross racing begins in their 600hp Subaru WRX STI Supercars.

Check out Atkinson and Sandell in the Brat and Forester Woody in Launch Control: GRC Atlantic City 2017 – Episode 5.09 video.

LG's New EV Battery Plant Is a Welcome News for Tesla
Tesla Giga Berlin's New Hurdle: It's Not Only the Gov't, but Now Tesla Itself
END_OF_DOCUMENT_TOKEN_TO_BE_REPLACED