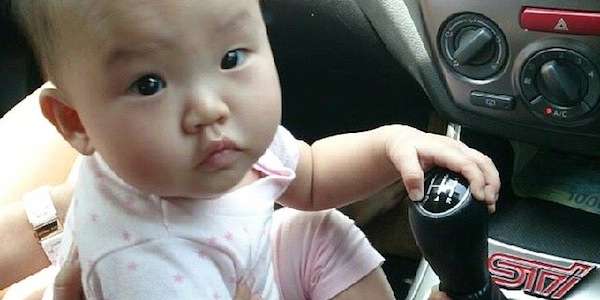 Torque News reader poll: Would you name your child Subaru?

Last year, five boys were named Subaru by their parents. Would you name your child Subaru?
Advertisement

In the U.S. last year, not just one, but five boys were named Subaru in 2013. In the image above, this baby boy doesn't look too pleased with his new name, but he isn't the only one. A newly released list from the Social Security Administration, shows Subaru was chosen five times. These five boys are a little young to get behind the wheel, but their parents seem to like their Subaru cars so much, they decided to name their boys Subaru. Would you name your child Subaru?

In a list of these baby names compiled by Nameberry.com, some of the most outlandish were Charger, Power, Hatch and Subaru, which were the most bizarre names chosen for boys last year. Also on the list were Warrior and Forever, which were each given to six boys, and Kyndle, was also given to six newborn boys. For boys, parents also chose the names Power and Vice.

Now we know that Subaru is the fastest growing brand in the U.S., but to name your child Subaru would be just cruel and unusual punishment for the boy. What if the kid wants to drive a Toyota, a Honda or a Ford? We all know how cruel kids can be when it comes to making fun of other kids names. This could be a source of ridicule for the poor boys at school.

But what does the name actually mean in Japanese? Subaru is the name of a star cluster in the Taurus constellation. Six of its stars are visible to the naked eye, but about 250 bluish stars can be seen if one uses a telescope. That’s where Subaru gets the six stars in their logo. Fuji Heavy Industries (FHI) maker of Subaru cars, was created by the merger of six companies, so we can see another connection to six stars.

We don’t know which car in the Subaru lineup these boys were named after, but five boys were named Subaru by their parents in 2013. Would you name your child Subaru? How about with a middle name of WRX, STI or BRZ?

Other Subaru stories of interest.
Is Subaru LEVORG the worst car name in the world?

Parks McCants wrote on May 19, 2014 - 11:30am Permalink
It's a shame that the iconic Subaru Brat was dropped from the line years ago.The name would fit well for either Boys or Girls in a world of ever-increasing me first, self-entitlement. ( jusss kid'n, sort-of -:)
jacob wrote on May 19, 2014 - 11:46am Permalink
what year is that? did they make sti's with 5 speeds in 08 or something?
John Goreham wrote on May 19, 2014 - 1:33pm Permalink
One of my kids is a "III" or "third", but my other one's name comes from the main character in Gladiator the movie and his middle name is from a character in Yellow Submarine (the little furry guy). So I don't think Subaru is that unusual. I would of course call the little fella "Suby."