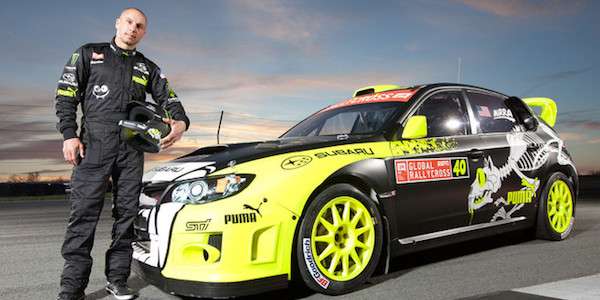 According to a report by WITN in North Carolina, Dave Mirra, BMX Star and Subaru GRC driver has died at age 41. The report says police officers found Mirra in his pickup early Thursday morning with an apparently self-inflicted gunshot wound. Authorities say he'd been visiting friends in the area.

Dave Mirra was a former BMX champion and one of the most decorated athletes in X Games history. The BMX star won a medal every year from 1995 to 2008, picking up 14 golds. His one-time record of 24 career medals was only broken in 2013 by Bob Burnquist.

Mirra drove a 2013 Subaru WRX STI for the Subaru PUMA RallyCross Team for a short time in 2013. The trio of three-time European RallyCross Champ Sverre Isachsen, BMX icon and seasoned RallyCross driver Dave Mirra and Skate legend Bucky Lasek made up the three-driver team for Subaru.

The Global RallyCross Championship expanded in 2013 to include International events as well as U.S. based rounds. The International rounds included competition at Global X Games events in Barcelona, Spain and Munich, Germany. The majority of the X Games Barcelona track was dirt, which was a departure from the nearly all-tarmac courses the GRC featured in 2012. Dave Mirra was excited about the possibilities with Subaru.

The Subaru WRX STI RallyCross Team is saddened by the news of Dave’s death. Torque News offers condolences to the family of Dave Mirra. He was survived by his wife Lauren and two daughters, Mackenzie and Madison.