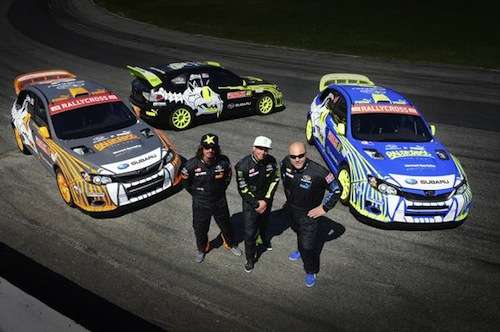 If you like fast and intense racing action, the Subaru PUMA RallyCross Team is ready to launch their 2013 WRX STIs in Barcelona for the 2013 season. See what changes they made this year.
Advertisement

We can’t imagine anything much more fun that stuffing a 600 horsepower powerplant into a 2013 Subaru WRX STI, climbing aboard and being launched in the air around a dirt track. That’s what the Subaru PUMA RallyCross Team is getting ready to do this Sunday at X Games Barcelona. The team will bring their three high-performance Subaru PUMA WRX STI RallyCross cars and see how well all the changes and preparations will pay off.

The trio of three-time European RallyCross Champ Sverre Isachsen, BMX icon and seasoned RallyCross driver Dave Mirra and Skate legend Bucky Lasek, in his sophomore year will be competing in this seasons RallyCross events around the globe. The event this weekend will take place in Montjuic Olympic Stadium where the 1992 Olympics took place in Barcelona, Spain.

The Global RallyCross Championship has expanded in 2013 to include International events as well as USA based rounds. The International rounds include competition at Global X Games events in Barcelona, Spain and Munich, Germany. A majority of the X Games Barcelona track will be dirt, which is a departure from the nearly all-tarmac courses the GRC featured in 2012.

This could be a good thing for the Subaru team that will driving the all-wheel-drive 2013 Subaru WRX STI cars. “I'm really excited about the amount of dirt,” said Dave Mirra. “I've done four years of stage rally so that could be an advantage for me going into my first race of the season. The only downside is the possibility of dust.” Will all the changes be enough to propel the team to success?

Last year there was a huge learning curve for the newly assembled Subaru PUMA team that is managed by Vermont SportsCar. They have been extremely busy in the off season updating and evolving its Symmetrical All-Wheel Drive powered Subaru PUMA WRX STI RallyCross cars. They are eager to test the newly updated cars against the world’s best again in 2013. Last year was challenging as they battled the well developed RallyCross cars of established European teams.

At the end of last season they knew they had to make changes and the team began an intense re-development program with the cars. They were stripped down to the frame and began to completely re-building and re-engineering them based on the knowledge learned from last years race season. “The car is completely rebuilt and went through major changes,” explains Bucky Lasek, driver of the #81 Subaru PUMA WRX STI. “It feels very different, in a great way, along with being stronger and more reliable.”

The cars are better in every area

The team feels like the changes will make a big difference this year and can already feel the difference the changes have made. “I had a very good test with the car last month and it immediately feels better than last year’s car,” commented Sverre Isachsen the driver of the #11 Subaru PUMA WRX STI. “The team has done a fantastic job this winter, and the car is better in every area.”

Dave Mirra, Bucky Lasek and Sverre Isachsen along with the entire Subaru PUMA RallyCross Team are in Barcelona and ready to go this weekend. The team has spent the last week preparing for an epic battle in the Montjuic Olympic Stadium on Sunday May 19. For more information including a 3D animation of the course check out this link.

Follow the team on Twitter: @srtusa. Get ready for exciting action as the Subaru PUMA RallyCross Team along with the three 600 hp Subaru WRX STIs get ready to launch in Spain!