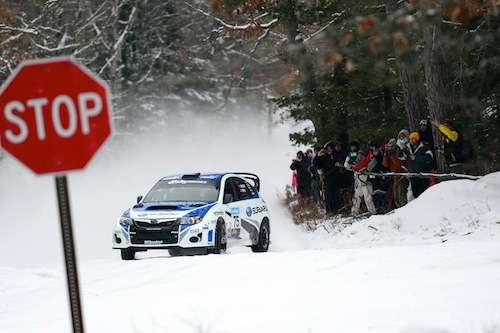 See what it takes to be a RallyCross driver [video]

Subaru takes their 2013 WRX STI and gets it ready for the Rally America and Rally Cross race season. Do you think you have what it takes?
Advertisement

Want to know what it takes to become a professional Rally and Rallycross driver? Subaru is introducing the all-new web series focusing solely on Subaru Motorsports, and they call it Launch Control. They will be featuring different episodes throughout the season dedicated to race fans and showing behind the scenes operations and what it takes to win. In the video below, episode 1, called “Rinse & Repeat,” the Subaru Rally and RallyCross teams get ready for this years grueling race season.

In this debut episode, Subaru Rally Team USA driver, David Higgins is preparing and training in Wales, UK for the upcoming season, while the Vermont Sports Car team is hard at work preparing the 2013 Subaru race cars. The day their season finished in 2012, was the day preparation for 2013 began. The narrater tells us what goes into winning a championship, “some say skill, some say teamwork, others simply say luck.” And of course all of those are correct.

It takes dedication to win

Chris Vandell, Team Marketing Manager, says that Subaru knows where their niche market is and applies that key technology to their race cars. He says that rallying is deeply rooted within their brand. The Subaru cars feature all-wheel-drive, they are tough and durable and this is ideal for the sport, that’s why we don’t see Subaru in NASCAR. He says, “Their product excels at a certain sport and that sport is rallying.”

Rallycross is another animal altogether

Rallycross, on the other hand, is relatively new for the team. Competing against established rallycross teams from Europe, the learning curve for Bucky Lasek, Dave Mirra, Sverre Isachsen, and the team has been steep. New venues. New race format. New Rules, New Cars. They have been catching up in the extreme form of racing. They have been going through some growing pains as they compete in the relatively new sport.

Vandell says the teams future looks very bright, but it’s been a difficult road so far. They have come a long way, but it’s not been easy. As quickly as the three Subaru WRX STI's ran on-track, the pace of development at the race shop has been just as quick. “This is everything it takes to win. This is everything that gets in the way of victory. This is Launch Control.”

Watch “Rinse and Repeat” as David Higgins prepares for the 2013 race season and see what it takes to be a Rally America champion.

Patrick Rall wrote on April 22, 2013 - 11:00am Permalink
Considering their poor showing in 2012 combined with the fact that not a single team car showed up for the first Global RallyCross event in Brazil - Im not sure that Subaru has "what is takes" to compete in the GRC. Maybe they should stick to stage rally where there are no other big names to beat.