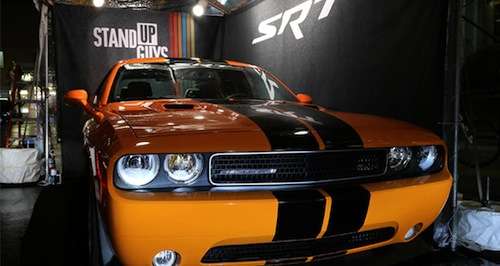 Challenger SRT gets high-profile role in “Stand Up Guys”

The new 2013 Challenger SRT gets the red carpet treatment at the “Stand Up Guys” premiere in New York.
Advertisement

The new 2013 Challenger SRT runs with a fast crowd at the “Stand Up Guys” premiere in Manhattan. The new movie that will be in theaters January 11, 2013 will feature the SRT Challenger and it will have a powerful role. In the film, Academy Award-winning actors Al Pacino, Alan Arkin and Christopher Walken take a Challenger SRT for the ride of their lives. As the three retired hired guns reunite to complete one final job, the SRT Challenger gets a high-profile role in the movie.

On Saturday night in Manhattan, the SRT Challenger received the red carpet treatment at the film's premiere at the Museum of Modern Art in New York City. The new Challenger SRT became the centerpiece of the after-party where Hollywood dignitaries arrived at the prestigious Plaza Hotel and were greeted by the Header Orange Challenger SRT. Guests were treated to the SRT display to see the new stars interior firsthand with its Viper-inspired seats and special race-inspired steering wheel.

The SRT Challenger will get to play a prominent role in the new “Stand Up Guys” film and will be a “solid sidekick” along side the three actors. In the new movie, the new Challenger SRT will be seen in some exciting scenes where the two-door coupe will be seen in exciting high-performance driving sequences. The performance 6.4-liter HEMI V-8 engine will be heard echoing off of city structures captured in “true movie theater sound.”

The massive HEMI V8 produces 470 horsepower and 470 lb ft of torque that comes mated to a six-speed manual Tremec TR-6060 Twin-Disc clutch transmission. An optional five-speed automatic is available. The rear-drive coupe will launch from 0-60 in less than 5 seconds and should prove to be the perfect get-away car in the movie.

The SRT has a tamer side

The trio of hired guns won’t be worried about fuel economy as they push the pedal to the metal, but there may be times when they need to keep a low profile while cruising around town. When matched with the automatic, it comes with a Fuel Saver mode that quickly transitions to four cylinders while driving at steady speeds on the highway or activating cruise control. Fuel-saver technology allows the driver the option to enjoy the best of both worlds. Chrysler says the big V8 will get 14-mpg city, 23-mpg highway manual or automatic.

"Stand Up Guys" stands among Hollywood's most compelling films for the upcoming award season. And the new 2013 Challenger SRT will be among the stars in its supporting performance. This is sure to be one of the highest profile movie roles for the “ultimate modern American muscle car” to date.