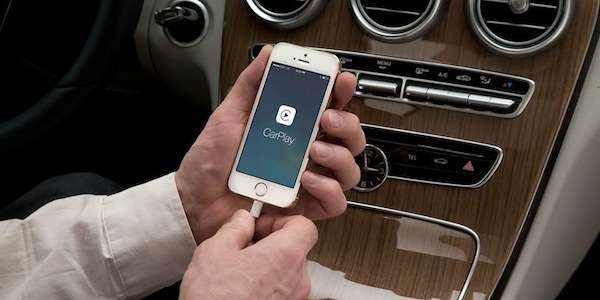 Mercedes-Benz will be the first German premium automaker to bring Apple's “CarPlay” infotainment system into cars, and it makes its debut in the 2015 C-Class. The new software is based on the iPhone and Mercedes-Benz is one of the first automakers along with Ferrari and Volvo to be trendsetters in smartphone integration.

How the system operates in vehicles will be demonstrated in a new Mercedes-Benz 2015 C-Class at the Geneva Motor Show. There will be live demonstrations at the Geneva show in the C-Class and it will give attendees an idea of what the future technology will do.

What is exactly is Apple’s new CarPlay?” It’s a new software operating system from designed to allow drivers easy access to functions like phone calls, text messages, maps, music, and Siri, all through the car’s dashboard. And this is just the beginning of a “massive evolutionary step” in the automobile industry. This new technology has the ability for vehicles to be monitored or even controlled by a central computer.

This new CarPlay in-car software will change the way we look at automobiles from now on. Our cars will become rolling offices as this new CarPlay rolls out in cars in the near future. Drivers can connect their iPhone to their vehicle with CarPlay integration and from there, Siri helps access the drivers contacts, make calls, return missed calls or listen to voicemails.

Apple says when incoming messages or notifications arrive, Siri provides an “eyes-free experience” by responding to requests through voice commands, by reading drivers’ messages and letting them dictate responses or simply make a call. CarPlay will also be able to give routing instructions based on recent trips via contacts, emails and texts. The new Apple software also gives drivers access to all of their music, podcasts, audiobooks and iTunes Radio by simply asking Siri what you’d like to hear.

How soon will it be available? Apple says CarPlay is available as an update to iOS 7 and works with Lightning-enabled iPhones, including iPhone 5s, iPhone 5c and iPhone 5. CarPlay will make its debut in Mercedes-Benz, Ferrari and Volvo at the Geneva Motor Show this week, and will be be available in “select cars” shipping in 2014. This new CarPlay technology will revolutionize the driving experience.

CarPlay will be demonstrated in the all-new 2015 Mercedes-Benz C-Class that is at the Geneva Motor Show this week. The new-generation C-Class arrives lighter and more fuel-efficient than the outgoing model. The new C‑Class delivers the best efficiency figures in its class. Mercedes says the new model consumes up to 20 percent less fuel than its predecessor.

In addition to the CarPlay software, C-Class comes with a host of new assistance systems and technology. Stop&Go Pilot, makes it the only car in the segment with partially autonomous driving capabilities. It also features a new chassis, optionally available with AIRMATIC air suspension, that offers thge smoothest ride in the segment.

As Mercedes-Benz rolls out the all-new 2015 C-Class, it will be featured with the new Apple software called CarPlay that will move the new C-Class into a new level of technology never seen before.

Other Mercedes-Benz CarPlay stories of interest.