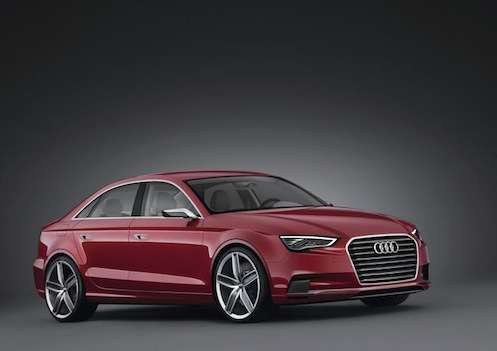 Audi USA has confirmed that the new Audi A3 Sedan will launch in the U.S. late this year.
Advertisement

Audi has confirmed on their Facebook page that the new third-generation Audi A3 four-door sedan will arrive on U.S. shores sometime late this year. As we reported here last month, it looked like we wouldn’t see the new four-door A3 sedan until later next year. But Audi has bumped up the launch and we will see the A3 sedan much sooner.

The A3 is Audi's smallest offering in North America and the new A3 sedan will represent the first time the company will offer a four-door sedan version in the U.S. It’s likely we’ll see the North American debut at the 2012 Los Angeles Auto Show and will be offered in showrooms shortly thereafter.

Audi suggests the A3 sedan may be followed a five-door hatchback and a soft-top convertible, but there are no guarantees. Audi even asked its Facebook fans if it should bring the A3 Hatchback and convertible models to the U.S. also. But it’s unlikely we’ll see either one as the German automaker is notoriously nervous to offer all their European options to the North American market.

A variety of powertrains will be offered

Audi will be introducing some new gasoline engines in the new A3 sedan starting with a totally revamped 121-horsepower 1.4-liter TFSI four-cylinder, plus an upgraded 177-hp 1.8-liter. The diesel variants will have 148 hp and 236 lb. ft. of torque in the latest 2.0-liter TDI. Sometime in the future, we could also see an four-door RS3 with a new 2.5-liter TFSI five-cylinder. Initially, the U.S. launch of the A3 will start out with both the 1.8- and 2.0-liter TFSI gasoline engines, which are both lighter and more fuel-efficient than before.

We do know the new A3 will be using the new VW Group MQB architecture, or "tranverse modular system" platform. The new universal architecture design will allow Audi to incline the engines rearward 12 degrees reducing front overhang by two inches while creating more front passenger legroom as the front axle can move forward now by 1.6 inches. As always, the A3 will offer both a front-wheel-drive version, and a more expensive quattro all-wheel-drive version.

New safety and convenience features will be offered

The new A3 sedan is expected to add a number of design, safety and convenience features that aren’t available on the current generation model. The new A3 sedan will feature front and rear LED lamps, lane-departure warning, blind-spot detection, active cruise control, and forward and rearward facing cameras, with voice activation for navigation and telephoning.

The A3 sedan will also get the new front pre-sense technology that allows the car to stop itself while traveling at slower speeds if it senses no reaction from the driver when a collision is imminent. Like all Audis, the A3 will have most of its controls operated from the Audi MMI interface with MMI Touch integrated on the center console.

The new Audi A3 four-door sedan will compete in the marketplace against the BMW 1 Series, Volvo V40, and the all-new Mercedes-Benz A-Class. But Audi intends to set the bench-mark in the class with the all-new A3 sedan, and it looks like they are getting it right.