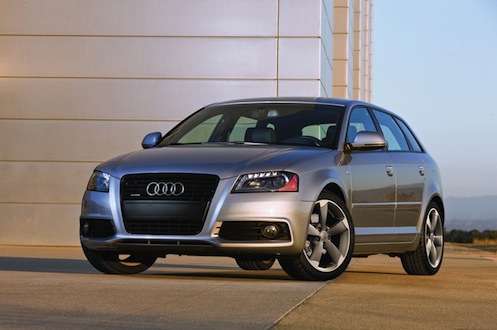 The 2013 Audi A3 new five-door Sportback and four-door sedan coming to the U.S. next October.
Advertisement

The 2013 Audi A3 will be a completely new model when it arrives here in the U.S., and we will see the all-new five-door Sportback model and a four-door sedans arriving in showrooms in October of next year. The five-door Sportback that will be sold in the U.S. will first be unveiled at the Paris Auto Show in October of this year, but we will have to wait for another year to get the new A3.

New details were released by Audi as Auto Blog attended a workshop covering the tech inside on the next-generation A3. The 2013 A3 will be using the new VW Group MQB architecture, or "tranverse modular system" platform. The new universal architecture design will allow Audi to incline the engines rearward 12 degrees reducing front overhang by two inches while creating more front passenger legroom as the front axle can move forward now by 1.6 inches.

Audi will be introducing some new gasoline engines in the 2013 A3 starting with a totally revamped 121-horsepower 1.4-liter TFSI four-cylinder, plus an upgraded 177-hp 1.8-liter. The diesel variants will have 148 hp and 236 lb. ft. of torque in the latest 2.0-liter TDI. The launch of the five-door Sportback will see a new 2.0-liter TFSI gas engine which will be in the next S3, and an ultra-efficient 1.6-liter TDI. Sometime in the future, we should see an RS3 with a new 2.5-liter TFSI five-cylinder which the U.S. should eventually get in the four-door body.

Initially, the U.S. 2013 A3’s will start out with both the 1.8- and 2.0-liter TFSI gasoline engines, which are both lighter and more fuel-efficient than before. And we will also continue to get the 2.0-liter TDI, most likely in both the Sportback and sedan configurations.

Inside, The new A3 will have every option available that is offered on the A6, A7 and A8. This will include a new compact design for the Audi MMI interface with MMI Touch integrated onto the top of the mouse-rheostat on the console. For 2013, the A3 will also get the new front pre-sense technology that allows the car to stop itself while traveling at slower speeds if it senses no reaction from the driver when a collision is imminent.

Other new technologies will include a new Bluetooth connectivity that will discontinue the use of cables on your phone by just placing the phone in the Audi console phone box and all is executed via a near-field planar system.

The premium compact segment is filling up and the A3 will be getting competition from the Volvo V40, and the all-new Mercedes-Benz A-Class. But Audi intends to set the bench-mark in the class with the all-new 2013 A3, and it looks like they are getting it right.