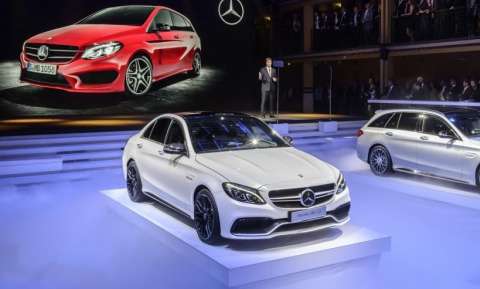 The sports pinnacle of the 2015 Mercedes-Benz C-Class line-up was unveiled in Paris called the Mercedes-AMG C63 S. What makes it track-ready?
Advertisement

The 2015 Mercedes-AMG C63 and C63 S made their world premiere with the show premier of the Mercedes-AMG GT at the 2014 Paris Motor Show. The new top model in the 2015 Mercedes C-Class line-up makes its debut in Paris in two models, a saloon and estate car. Both sporty models combine high-performance with everyday drivability and functionality. The C63 is powered by a 4.0 liter V8 biturbo engine that’s closely related to the power unit in the new Mercedes-AMG GT.

The new 2015 Mercedes-AMG C63 will be powered with the all-new and hand built 4.0-liter, biturbo V8 engine. This new engine, codenamed M177, is more powerful, smaller, lighter and 32 per cent more efficient than the engine it replaces. Mercedes-AMG C63 comes in two models, the standard C63 with 476 hp and 650 Nm of torque or, in C63 S form, developing 510 hp and 700 Nm of torque. Mercedes says the new biturbo is the world’s most fuel efficient V8 model and significantly more efficient than its less powerful competitors with six-cylinder engines.

What makes C63 S ready for the track?

This new AMG C 63 S is the ultra-performance C-Class model and gets upgrades that make it track-ready. The new-generation C63 uses a unique suspension setup with a four-link suspension up front that includes independent steering knuckles and a wider track to improve stability. At the rear, the multilink system uses independent mounts and an increase in negative camber. Both are linked to the AMG Ride Control system, operating through electronically-controlled three-stage dampers, ranging from comfort to track settings. With the track setting, a mechanical locking rear differential is fitted to the C63, with an electronic version for the C63 S. A new braking system uses 390 mm discs at the front and 360 mm at the rear with the option of enhanced ceramic discs available for track-orientated driving.

The fastest AMG C-Class variant yet

The new 2015 Mercedes-AMG C63 is the fastest AMG C-Class variant yet. Mercedes says the new C63 S Sedan accelerates from 0-62 mph in 4.0 seconds with each variant limited to a maximum top speed of 155 mph. The Standard C63 Sedan hits 62 mph in 4.1 seconds. All that power is transferred to the wheels via a heavily revised version of the AMG Speedshift MCT 7-speed transmission featured on the C63, now with significantly quicker shift times to improve responses.

You can have both high-performance and everyday drivability with the new AMG C63 S. Dr. Dieter Zetsche, Chairman of the Board of Management of Daimler AG and Head of Mercedes-Benz Cars, speaking at the Mercedes press conference at the Paris Motor Show says, “With the new Mercedes-AMG C63 S, our performance experts demonstrate once again that characteristics like ‘family friendly’ and ‘race-track ready’ need not be contradictory.”

The all-new 2015 Mercedes-AMG C63 performance car makes its market launch in Europe in February 2015 with the more powerful C63 S Sedan. The C63 with and C63 S Estate will follow in April 2015. The cars are in the spotlight for the first time now at the Paris Motor Show 2014.