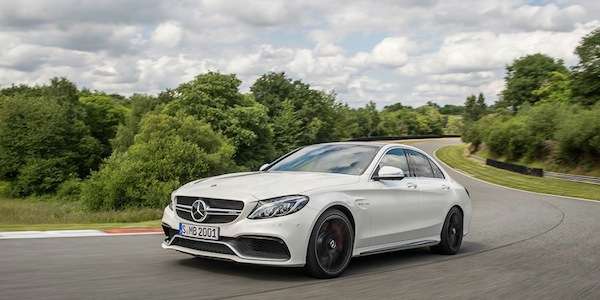 Mercedes-Benz introduces the new 2015 Mercedes C63 AMG with a new engine, new nomenclature and two powerful variants. Why does it get a new name?
Advertisement

The new 2015 Mercedes-AMG C63 will be powered with the all-new and hand built 4.0-liter, biturbo V8 engine. This new engine, codenamed M177, is more powerful, smaller, lighter and 32 per cent more efficient than the engine it replaces. Mercedes-AMG C63 comes in two models, the standard C63 with 476 hp and 650 Nm of torque or, in C63 S form, developing 510 hp and 700 Nm of torque. The new 4.0-liter engine comes equipped with twin turbochargers neatly packaged in the ‘V’ of the cylinder banks and cooled via a special duct built in the hood of the car.

The new 2015 Mercedes-AMG C63 is the fastest AMG C-Class variant yet. Mercedes says the new C 63S Sedan accelerates from 0-62 mph in 4.0 seconds with each variant limited to a maximum top speed of 155 mph. The Standard C 63 Sedan hits 62 mph in 4.1 secs. All that power is transferred to the wheels via a heavily revised version of the AMG Speedshift MCT 7-speed transmission featured on the C63, now with significantly quicker shift times to improve responses.

C63 is ready for the track

The new 2015 C63 uses a unique suspension setup with a four-link suspension up front, that includes independent steering knuckles and a wider track to improve stability. At the rear, the multilink system uses independent mounts and an increase in negative camber. Both are linked to the AMG Ride Control system, operating through electronically-controlled three-stage dampers, ranging from comfort to track settings. With the track setting, a mechanical locking rear differential is fitted to the C63, with an electronic version for the C63 S. A new braking system uses 390 mm discs at the front and 360 mm at the rear with the option of enhanced ceramic discs available for track-orientated driving.

The 2015 Mercedes-AMG C63 and C63 S makes its world premiere on October 2, 2014 together with the show premier of the Mercedes-AMG GT at the Salon de l’Automobile in Paris. The new performance car makes its market launch in Europe in February 2015 with the more powerful C63 S Sedan. The C63 with and C63 S Estate will follow in April 2015.