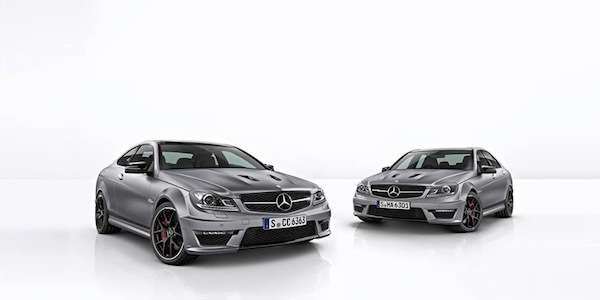 The power source of the new 2015 Mercedes-Benz C63 is a new Biturbo V8 engine. What new AMG sports car is it related to?
Advertisement

Mercedes-Benz will unveil the new 2015 C63 AMG shortly and they tell us the new C63 AMG will get a new Biturbo V8. The new engine will be a highly efficient AMG 4.0-liter V8 Biturbo engine, and it will be based on the sports car engine of the Mercedes-AMG GT. The engine that powers the new AMG GT produces an amazing 126.3 horsepower per liter.

AMG developed the new AMG GT powerplant from their involvement in motorsports. This engine is being produced by AMG for the first time in the 2015 Mercedes AMG GT. It includes motorsport-inspired technology like flow-optimized cylinder heads with zirconium alloy for maximum temperature and thermal conductivity, and it all helps maximize performance in all conditions.

Tobias Moers, CEO of Mercedes-AMG GmbH says the new 2015 Mercedes-Benz C63 AMG will be powered by the same AMG powerplant. He says, "It goes without saying that the successor to the current C 63 AMG will again be powered by an eight-cylinder engine. We owe that to our loyal fans, plain and simple. The AMG V8 Biturbo engine mesmerizes not only with maximum power and torque, but also with the absolute best fuel economy in the comparative segment“.

Mercedes says under the hood of the C63 AMG's successor is an all-new 4.0-liter V8 Biturbo engine. The eight-cylinder Biturbo engine will deliver exceptional performance with an unrivaled power output range of up to 375 kW (510 hp) and 700 Nm of torque. At the same time the eight-cylinder high-performance vehicle impresses with low emissions and the world's best fuel economy in the segment. The latest member of the AMG BlueDIRECT engine family sets new standards with fuel consumption of 8.2 liters/100 km (NEDC combined).

The best-selling AMG on the planet

The Mercedes C63 AMG has a history of V8 power and it began in 1997 with the C43 AMG. The first C63 AMG celebrated its market launch in 2008. Around 8000 of these high-performance C-Class vehicles were sold in 2012, the year with the strongest sales. With sales of some 40,000 vehicles, the C63 AMG is also the best-selling AMG model to date.

The new 2015 Mercedes-Benz C63 AMG will raise the bar even further in terms of performance and driving dynamics. Look for the power source of the new C63 AMG to be an all-new V-8 based on the 2015 Mercedes AMG GT Biturbo V8.