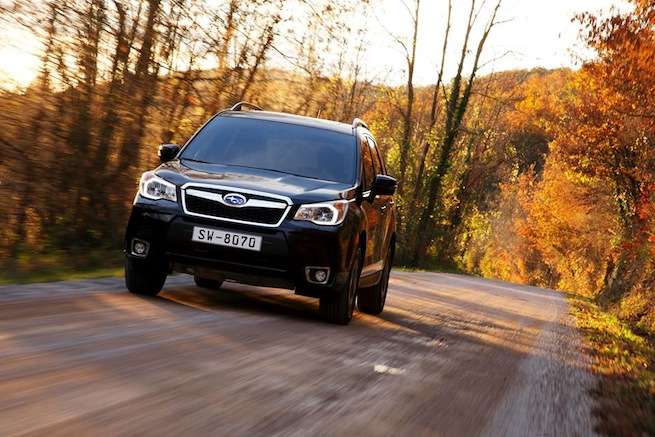 The 2014 Subaru Forester wins Motor Trend Sport/Utility of the Year for 2014 beating 12 impressive competitors and there are six reasons why it’s the best.
Advertisement

Subaru may have to increase production of the new 2014 Forester after the latest Sport/Utility of the Year award from Motor Trend. It’s already a sales success for the brand with sales up 46% year-to-date over 2012. But it isn’t really a surprise as Subaru sales are up across the whole lineup for 2013. Subaru of America is on track to achieve its fifth-consecutive year of sales increases and top 400,000 vehicle sales in the US market in 2013 which blows away their sales forecast at the beginning of the year.

Why is the Forester such a huge sales success and what did Motor Trend find that made it the best mid-size SUV in the world? The Subaru brand is not an overnight success. They have been been building quality cars for decades. In the past six years of competition alone, Subaru has had three winners of the MT award: The 2014 Forester, 2010 Outback, and the 2009 Forester. The 2013 XV Crosstrek also ranked as a finalist in 2012.

The new Forester is a result of Subaru’s ongoing product development that is committed to their current loyal customers, and attracting new buyers to the brand. Thomas J. Doll, president, and chief operating officer, Subaru of America, Inc. said in the press release, “Our product, engineering, sales and marketing teams all work hard to provide the best products and experiences we can for our owners. Receiving this distinction from Motor Trend truly adds credence to our mission.”

The Subaru mission paid off in six key areas of evaluation by MT. There are many reasons why the 2014 Forester beat 12 other strong competitors, but Motor Trend evaluated all 12 SUVs in these six key areas.areas.

It starts with Design Advancement. Subaru redesigned the 2014 crossover from the ground up. Sales of the crossover had begun to drop off and Subaru knew they needed to make drastic changes. MT was impressed with Foresters well-executed exterior and interior styling, innovative vehicle packaging and good selection and use of materials.

Engineering Excellence was the next category. Subaru went to their current customers with a survey and asked them what they liked, and more importantly, what they didn’t like about the previous generation Forester. MT looked at total vehicle concept and execution; clever solutions to packaging, manufacturing and dynamics issues; and cost-effective tech that benefits the consumer.

Performance of Intended Function was the next area of evaluation. Subaru just received another award for having a “Good Design” by enriching the lives of consumers. The Forester does an excellent job its planners, designers, and engineers intended it to do.

Efficiency is fourth area of evaluation. It achieves low fuel consumption and a small carbon footprint relative to the vehicle's competitive set. The Forester jumps to the head of its segment in all-wheel drive fuel economy, with the 2.5i model achieving EPA estimates of 24 mpg city/32 mpg highway/ 27 mpg combined (with CVT).

Safety is a category where the Subaru brand is number one in the world across its whole lineup. The Forester shines in its ability to help the driver avoid a crash, as well as the secondary safety measures that protect its occupants from harm during a crash. It’s the best vehicle in safety in its class.

The 2014 Forester has received a Top Safety Pick+ (TSP+) award from the Insurance Institute for Highway Safety (IIHS). The Forester is the first vehicle to ace every aspect of the challenging small overlap front crash test conducted by the IIHS. The Forester is the only one of 13 small SUVs to earn an overall rating of good in the test.

Value is last but not least. Forester has a competitive price with its equipment levels, measured against those of vehicles in the same market segment. The 2014 Forester is priced from $21,995, the Forester features a new 250-horsepower 2.0-liter direct-injection turbocharged Boxer engine or a 170-horsepower 2.5-liter naturally aspirated 4-cylinder Boxer engine. A Lineartronic CVT (continuously variable transmission) is standard in the 2.0XT models and available for the 2.5-liter models, which features a standard 6-speed manual transmission.

Motor Trend’s evaluation of the 2014 Subaru Forester just found out what Subaru owners have known for years. Their vehicles give their owners everything they want in an all-wheel-drive vehicle.