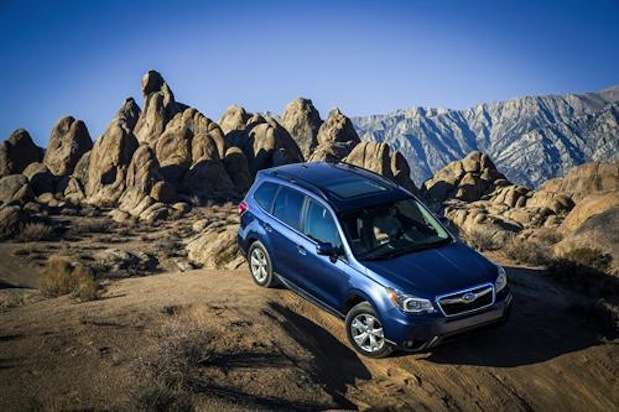 Head to Head: 2014 Subaru Forester wins vs everyone else

Subaru of America has announced that the 2014 Subaru Forester wins Motor Trend Sport/Utility of the Year for 2014 beating 12 impressive competitors.
Advertisement

There are six reasons why the 2014 Subaru Forester is the best mid-size SUV in the world, and USA’s influential Motor Trend magazine tells us why it beats everyone else. The new Forester has won the 2014 Motor Trend Sport/Utility of the Year competition and is the only automaker to win it three times. This is the most wins by any vehicle in the Sport/Utility category. The 2014 Forester keeps getting awards and this latest is revealing.

The new 2014 Forester beat out a large field of twelve other all-new or significantly updated SUVs to win the the Motor Trend award. This Sport/Utility of the Year by Motor Trend magazine is not just a side-by-side comparison test, but includes six key areas of criteria to evaluate the SUVs. And it’s only open to all-new or substantially upgraded vehicles that have gone on sale in the 12 months from November 1 of the previous year.

The six key areas of evaluation where Motor Trend felt the Forester beat the competition include: Design Advancement, Engineering Excellence, Performance of Intended Function, Efficiency, Safety and Value. The editorial staff at MT conducted an “exhaustive” three-phase testing process to come up with the winner.

The three phases of evaluation included a full tech check and weigh-in, acceleration, braking, and handling. MT editors also spent three days on the road driving under a variety of road surfaces and conditions to evaluate ride and handling, engine and transmission smoothness and responsiveness, wind and road noise, and ergonomics. MT also used a dirt-tract to test traction, stability, and braking control systems. After all this, the Forester stood on top of the mountain and left the others behind.

Motor Trend’s editor-in-chief Ed Loh, said, “The 2014 Subaru Forester beat a highly competitive field of SUVs because it best met our award’s six key criteria. Smart design, thoughtful engineering, and a compelling performance on road and off were the keys to the Forester’s win. Our editors were particularly impressed by the powerful yet efficient turbocharged engines, the intelligent and sporty CVT transmission, and the excellent visibility and interior package found within the Forester. Practical, affordable, efficient and fun-to-drive - Forester truly ticked every box”.

The new Forester also recently won the "Good Design Award 2013" from the Japan Industrial Design Promotion (JDP). The award is given to companies and products who enrich the lives of the people who use them. The Forester won this award because it's loaded with intrinsic value and advanced technology that many automakers overlook. The design studios in Japan, the U.S. and Europe all partnered together to come up with a design for the new Forester that is getting attention all around the globe.

Subaru is the only automaker to win this Motor Trend title three times, the most wins in the Sport/Utility category. The all-new 2014 Subaru Forester is the best mid-size SUV on the planet and beats an impressive field of competitors. Come back tomorrow and we’ll take a detailed look at the six key areas of evaluation.