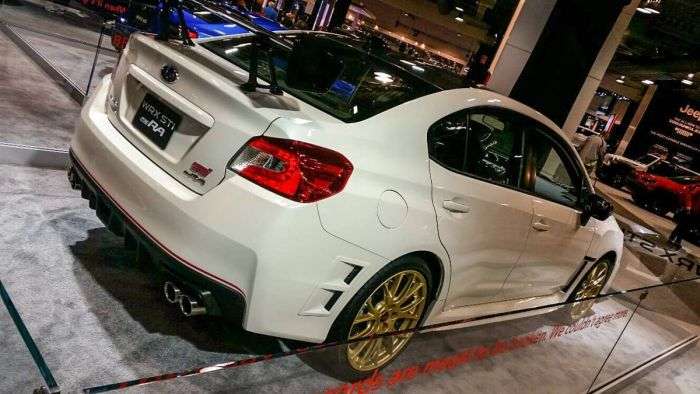 Who says the 2018 Subaru WRX STI Type RA is not worth the price?
Advertisement

If you want one of the 2018 Subaru WRX STI Type RA limited edition models, it’s too late in Canada, and they may be sold out in the U.S. too. Many thought the limited edition Type RA STIs were overpriced, but it hasn’t stopped performance enthusiasts from snatching them all up.

Canada received just 75 examples of the 2018 WRX STI Type RA limited edition models, (which stands for Record Attempt) and sold their allotment quickly. Subaru Corp produced 500 examples of the special models for the U.S, and they are also likely all sold. Built to commemorate Subaru’s record attempt last summer at the Nurburgring, Subaru of America hooked up with Prodrive to build one special STI specifically for this record attempt. The performance car hit a record sub-seven time of 6:57.5 at the Ring in July 2017, the fastest-ever lap for a sedan.

The production 2018 Subaru WRX STI Type RA comes with a price tag of $48,995 plus destination ($860), while the base 2018 Subaru WRX STI can be had for $36,095. This represents a premium of $10,400 over a base STI equipped with Recaro seats and keyless entry and ignition (both features are standard on the Type RA). 575 North American fans thought It was worth the extra cost who were lucky enough to get one.

The largest volume Subaru dealer in the U.S., Heuberger Subaru in Colorado Springs, on their Instagram account, said, “It’s a shame only a select few of us will be able to lay our hands on this upcoming beauty. Did you make it onto any waiting lists yet? Ours filled up inside of an hour once the announcement dropped.”

Heuberger told Torque News they were anticipating no more than 5 limited edition models to be allocated to them but had 10 buyers on their waiting list "just in case we get lucky." The 10 hopeful buyers understood the dealer is limited by Subaru of America, so they all had their fingers crossed.

Drive it, don't stick it in storage

If fans are expecting the 2018 Subaru WRX STI Type RA to become a collector item, they might want to think again. While some Subarus like the late great Colin McRae’s legendary Subaru Impreza rally car just sold recently for big money ($292,903) at auction, it likely won’t happen with the new STI Type RA.

So for the 575 performance enthusiasts who did buy the 2018 Subaru WRX STI Type RA, don’t stick it in the garage hoping it will increase in value. It’s a car that was meant to be driven and shown off on the street and car shows. You’ll only be one of 575 owners who have one, so have fun with it and enjoy the rarity of the car.

Guillermo wrote on March 19, 2018 - 10:14pm Permalink
I am happy for them! I hope to hear them on the street. They have the last iteration of a rumbling STI. That's special! I'm glad that I bought my STI with the performance exhaust for less than 36K. I would love the pistons and exhaust system that the RA has, but what I like more of mine is that I get to drive it and hear it. At the prices that these are being sold I could only enjoy them if someone else had them.