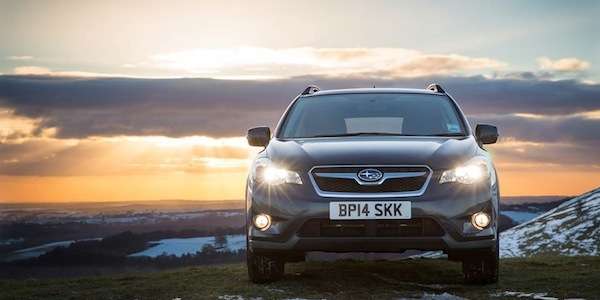 The 2015 Subaru XV Crosstrek wins a Vincentric Best Value in America award for the 3rd year in a row. What sets the XV Crosstrek apart?
Advertisement

Vincentric’s Best Value in America awards have been announced and Subaru’s 2015 XV Crosstrek picks up the award for 2015 in the Entry-Level Compact Crossover class. This is the third year in a row the XV Crosstrek multi-purpose vehicle has won the award. Vincentric says the XV Crosstrek has the lowest fixed costs and highest resale value in its class.

XV is tops in cost of ownership

What sets the XV Crosstrek apart from other entry level compacts is the Boxer engine in combination with AWD technology, which provides dynamic driving performance coupled with its unique safety features. The new generation EyeSight safety system is now offered on the 2015 XV.

XV squarely at the top for vehicle safety

For 2015, Subaru XV Crosstrek gas and Hybrid models also arrive with new infotainment and better fuel mileage than the outgoing model. The big improvement comes in the area of safety in which Subaru is leading the industry. 2015 XV now is available with the brands new-generation EyeSight safety system that puts XV squarely at the top for vehicle safety. Both gas and hybrid models will be offered with this safety feature now.

In addition to being high on the fun to drive meter, its all-weather capabilities and multi-purpose utility, Vincentric says the 2015 Subaru XV Crosstrek also has the lowest fixed costs and highest resale value in its class.

Roger Kennedy wrote on April 4, 2015 - 9:36am Permalink
why won't my 2015 XV Crosstrek get 35MPG on the imperial gallon of fuel????
Larry Galearis wrote on April 21, 2015 - 5:31pm Permalink
I have a 2014 Crosstrek hybrid that gets between 5.4 l/100 and 5.8 l/100 in mid teens temps (60 degrees American) on modestly hilly terrain highway driving -if I am careful. I monitor the gas consumption gauge carefully. In city driving with few stop and goes my best is 4.4l/100k. For those metric challenged out there (and using imp gal.) the hiwy consumption is around 60mpg and the city is 64.2 (best score). The reason people cannot do this themselves is a matter of driving style/habit, below freezing temps or very hilly topography. Use the monitor resources and keep the consumption needle on the gauge at the right extreme stop as much as you can and you will see this kind of consumption too.