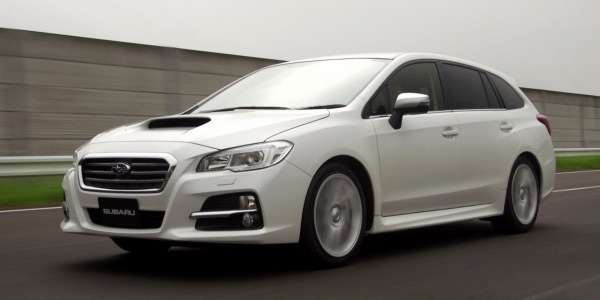 The 2015 Subaru Levorg won’t be going on sale in the U.S. What’s the reason Subaru won’t bring the sports tourer to the U.S. market?
Advertisement

Demand for the Subaru Levorg sports tourer is high and the Japanese automaker has another successful launch. Unfortunately, the U.S. won’t be getting the new sporty Levorg wagon. The Levorg just made its European debut in Geneva and will launch in the UK later this fall. U.S. buyers can only look and not touch.

New 7-seater Subaru will be focus in U.S.

Because Subaru is in the process of designing a new 7-seat SUV that will compete with the strong selling Toyota Highlander, Nissan Pathfinder and Honda Pilot, the focus in the U.S. will be put there and not on the Levorg. Subaru is expanding production capacity at their Indiana plant in the U.S. and the new seven-seat Subaru SUV will be built in the U.S. Expansion at the Indiana factory will be completed by 2017 and would be ready to handle production of the new model.

Murakami also said the Levorg is a replacement for the former Legacy station wagon in Australia and was initially developed for Japan. Subaru has since decided to sell it in Europe. Subaru decided the priority for the United States was also the bigger Legacy sedan that's designed primarily for that market, Murakami said.

Levorg is the technology leader for Subaru

Even though the Levorg won’t be sold in the U.S., we could see some of its new technologies on future Subaru vehicles. The new sport tourer features engine technology that we’ll likely see on new Subaru multi-purpose vehicles in the U.S. Subaru has been developing new powertrains that will be more fuel-efficient and the new Levorg is the first to receive it.

Subaru is catering to U.S. buyers who seem to want larger SUVs like the Hyundai Santa Fe, Kia Sorento, Nissan Pathfinder, Mitsubishi Outlander, Toyota Highlander and Honda Pilot. Because the market for those larger vehicles is so strong, the U.S. won’t be getting the smaller 2015 Subaru Levorg sports tourer.