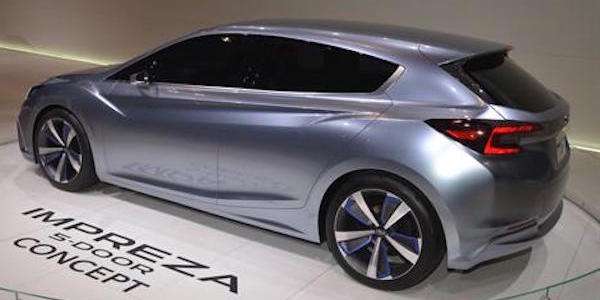 5 Reasons Why Fans Are Disappointed In the New WRX/STI

When we look at the Subaru Impreza 5-Door Concept at the Chicago Auto Show, it’s another reminder of what WRX STI enthusiasts would like to have. Where’s the 5-Door STI? The 2016 Subaru WRX and WRX STI performance cars are missing 5 doors. Five doors look good on the concept and they would look better on the WRX and WRX STI performance cars. Fans are disappointed because they want the WRX/STI hatch.

Will Subaru bring back the 5-Door WRX/STI?

The Impreza 5-Door Concept is a forerunner of things to come from Subaru. This is one of Subaru's next-generation strategic vehicles, an idea that was revealed in Fuji Heavy Industries (FHI), Mid-Term Management Vision Prominence 2020 announcement in May 2014. The Impreza Concept introduces the new Subaru Global Platform. It will underpin the next-generation WRX/STI.

Subaru says the Impreza Concept hints at the design direction of not only the new Impreza, but of Subaru's future models as a whole. We reported last year that WRX Project General Manager, Masuo Takatsu said “a five-door body style was still under consideration.” Considering the strong backlash from WRX/STI fans around the globe, it’s no surprise.

WRX/STI sedan is still selling well all over the globe

Subaru has been hearing it from WRX/STI performance fans who want the utility and versatility that the body style offers. “We have received strong interest from the U.S., where the hatchback was 50 percent (of previous-generation WRX sales), so we're now considering it,” Takatsu said last year.

The WRX/STI has been selling like hot cakes all over the globe and Subaru isn’t under the gun to bring back the hatchback yet. The U.S., Japan and Australia are Subaru’s biggest WRX STI markets where fans are snatching up the performance car as fast as FHI can built them at the Gunma factory in Japan.

When Masuo Takatsu was in the U.S. for the WRX/STI launch, he said “limited engineering resources” were behind both the lack of new WRX/STI hatch and an automatic version of the upcoming WRX. Now Subaru has redesigned the Impreza and it could be time for the WRX/STI to get a hatchback body style.

Why are 5 doors important for WRX/STI?

Why is it such a big deal for Subaru to reconsider offering a five-door hatch in addition to the sedan? For STI buyers, it’s all about the versatility and utility that the hatchback offers. Performance fans use their cars for everything and they love the extra functionality that the hatch offers. In addition to offering performance, it offers buyers to use the WRX/STI for multi-purposes. It can be used for recreational activities like transporting mountain bikes, snowboards, and surfboards for use on the weekends.

The Impreza 5-Door Concept at the Chicago Auto Show points to the design direction of the entire Subaru lineup. Subaru WRX STI fans can only hope it points to a new 2017 Subaru WRX/STI hatchback.

scott wrote on March 5, 2016 - 10:09pm Permalink
I'm holding out for the hatchback, I don't really have any interest in the sedan. Thing is if I want a sporty hatchback with AWD and in manual the only other real options are the Golf R and the upcoming Focus RS, both of which are in a higher price bracket.
Dan Dunay wrote on July 9, 2016 - 5:53pm Permalink
I completely agree. The Golf R has a hatchback, but a tiny cargo area. The Focus RS is a new product and I fear its long-term reliability. I'm going to run my 2005 WRX hatchback until the wheels fall off.
Rett wrote on March 20, 2016 - 3:41pm Permalink
Subaru WRX STi=Long in the tooth motor (EJ series) Corolla like looks from the side. Poor fuel milage best 25mpg! Many cars faster and more capable for the money $35k....Why? Because its a Subaru...
Dan Dunay wrote on April 26, 2016 - 9:47am Permalink
I'm also holding out for the hatchback WRX or WRX/STI. I contacted Subaru and told them as much last year. They responded that they were listening, but apparently that's not enough.
Jose wrote on April 28, 2016 - 12:42pm Permalink
I'm planning to buy a Subaru but they don't make wrx wagons I'm not interested for sedans anymore
Tommy Raddliff wrote on July 9, 2016 - 1:37pm Permalink
FAIL. sedans are junk. i want to put my gear in the back. Subaru has let us down. 5-door WRX/STi was the greatest car of all time.
Murray Farnswoth wrote on July 28, 2016 - 12:54am Permalink
I have kept my 2000 WRX hatch for all this time because the bug eyes were so ugly, the wife got the 2007. The hatch that came out in 2008 or so was too small, now there are only sedans, no sign of a levorg with either manual or WRX capabilities. Pretty much a total fail all round. Even the 6th gear is a new thing in WRX hard to reason. I am still hanging on in hope of a decent manual hatch although I still smile everytime I drive my 2000 with 170,000 km . At this rate I will get my pension before something buyable comes out.
Joe wrote on August 4, 2016 - 5:58pm Permalink
They talk a lot about the buyers who want to put their mountain bikes and camping gear in the back of the hatch. They're completely ignoring a huge number of buyers with families who need a practical car for things other than 20-something outdoor adventures. I have two kids and wife. My wife knows why I bought my 2011 WRX, and jokes about it from time to time. But when her Forrester is in the shop, or I need even more room for a work project, she's comfortable trading me her car for the WRX. If it were a sedan, I'd have a much harder time convincing her it was a practical choice, and she already feels a bit weird as a 50 year old woman diving a 22 year old's car. The sedan would be a deal breaker. I'm not ready to replace the WRX yet, but if there isn' a hatch version when it is time, I'll find another hatch- a Focus ST or a Mazdaspeed 3 or similar. I love my WRX and hope FHI has the foresight to see all of us old guys who love to drive, can't afford a Cayenne AND an Impreza, and have to sell the concept to a wife who doesn't quite get it.
Elliot wrote on February 20, 2017 - 12:36pm Permalink
Your money. Your car. Your life. I don't know why you have to appease your wife with this car but you already have a forester why do you need 2 cars that do the same thing?
Joe wrote on February 20, 2017 - 7:12pm Permalink
A: The two cars don't do the same things at all. The WRX is a small, quick, fun car that I drive daily. The Forrester is my wife's, and she uses it to haul our kids and their friends around. B: Marriage is a foreign concept to kids who read these blogs as they dream of having a fun car. It's a partnership wherein neither ought to give up their autonomy or personality, but also must respect the other's wishes and concerns. My wife and I are in this together and we work as a team. She doesn't buy stuff for fun without running it by me, and afford her the same courtesy. Sure if I lived alone and had fewer expenses I'd probably have a Cayman and no one could convince me otherwise. But I don't live alone and I don't want to. I appreciate her needs and she appreciates mine. Now bring back the goddamn hatch, Subaru! You're losing potential buyers on both ends of the age spectrum who want room to store stuff and are embarrassed by lugging around a big plastic wing that does nothing to affect performance and everything to catch the cops' eyes.
misterears wrote on January 18, 2017 - 3:25pm Permalink
I have a 2009 WRX silver hatchback and won't buy a new sedan WRX. I'll search for a low mileage blue 2013-2014 hatchback. I assembled a sideview pic of 8 different white sedan car models including Impreza. Asked car-oriented friends to find the Impreza. No one could identify it....all looked nearly the same.
Schuyler wrote on March 9, 2017 - 12:17pm Permalink
They couldn't identify a hatchback from a sedan? Would you be able to send me the photos, im intrigued
misterears wrote on March 20, 2017 - 7:53pm Permalink
Just bought a 2013 WRX blue hatchback with 30kmi. Love it!
Rrrrrudy wrote on December 24, 2017 - 1:14am Permalink
The boxer engine and 5 doors on a WRX/STI is NOT replaceable. Mamuro Ishii is.
kelly brooke wrote on August 31, 2020 - 10:05pm Permalink
thank you for sharing this article that Subaru has been hearing it from WRX/STI performance fans who want the utility and versatility that the body style offers.